Answer me this: How the heck does someone injure themselves while sleeping? Mario says I toss and turn like crazy, but seriously, I find it hard to believe that I can thrash around so much so that I jam my lower back right up. Ohhhh but I can. Yep. Didn’t even have to run for this injury.

I got tired of waiting for my physio to move me up to the top spot on the waiting list (I know, I know, I only called him two days ago, but what can I say? I’m impatient) so instead, I called my trusty massage therapist, who’s a hardcore distance runner, and is super chatty, and always leaves me with tips and pointers, and maybe even a few discount codes for online running sites too – those have come in handy 🙂

He informed me that I had in fact jammed up my sacrum (the left side of my lower back, which the butt cheek muscle happens to be hitched to) which was probably inflaming my bursa, the ongoing pain in my butt … yes, I have a pain in my butt. And while massaging my back and thigh, he recommended I start hopping and skipping at the track to help my form.

Hopping and skipping? Really. Yep. Apparently all the tracksters do it, so, me wanting to be the next Usain Bolt (female version of course!) that’s exactly what I’m going to do! I’ll let you know how it goes. 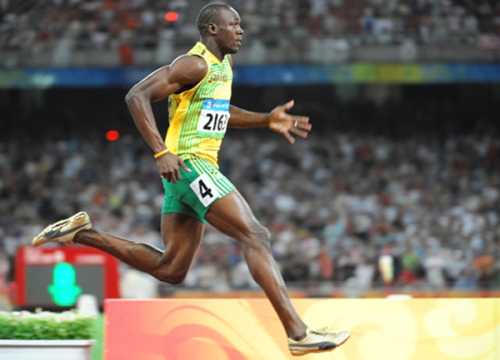 Look at that gazelle-like form!

When I got home tonight, I saw that the Anti-HST petition peeps were set up outside our condo building. For those of you who aren’t familiar, the B.C. government is trying to implement a new tax that is a combination between the federal sales tax (5%) and the provincial sales tax (7%) and would apply to more goods, like bicycles, which were exempted from the provincial sales tax previously.
I am so against this tax. 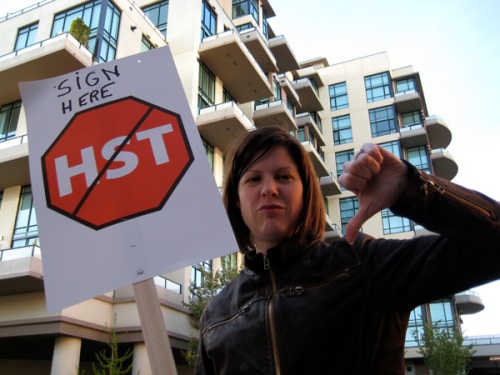 Check out the scowl!

I know that the government waxes poetic about how the HST will help recover our economy, which is great in theory, but they also gush about how they want B.C. to be the most physically fit province in the country. It makes no sense to me why they would add this 12% tax to recreational things like bicycles, swimming lessons, gym memberships, rink rentals, and massage therapy if they want people to continue engaging in physical activity. You can’t have both.
I so signed that petition! 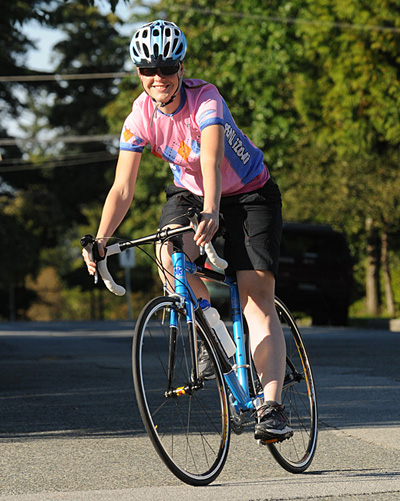 With HST my Zing would have been about $100 more!

Because of the end-of-day massage, I wasn’t allowed to do a run or a gym workout when I got home, which was kind of sucky given that I haven’t done anything since my Sunday run as I had pain on Monday, a late school board meeting on Tuesday, and am babysitting my lovely little nephews on Thursday – which means nothing until Friday. ACK! But the massage therapist told me that I caught it early, so good news 🙂