Yesterday morning I woke up with one focus: I was going to make it a great day. I got the idea from a recently retired official in the school district I report on. He always ended his conversations with that statement, and it always made me giggle. It is kind of corny after all 😀 But this guy always had a smile on his face and was always friendly-like even when I was asking him tough questions that others might have bristled at. And after having such a great New Year’s weekend, I didn’t want it to end, so I took a page from his book. I was going to have a great day.

And when it was a day that included going to the Abbotsford Heat vs. Manitoba Moose hockey game with my big brother, how could it be anything but? 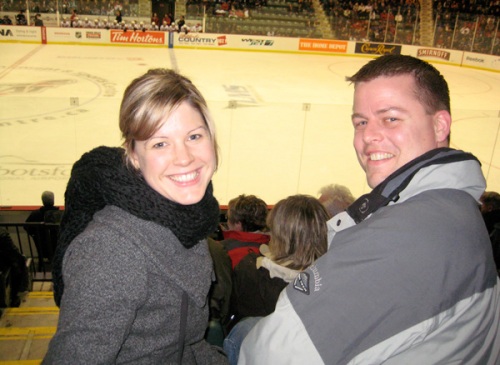 “SuperMattMan” contacted me late the night before asking if I wanted to go to the game with him (he’s got season tickets). At first I hesitated as 10 cm of snow was being forecasted and I wasn’t so keen on driving home in it after the game, but then I thought, I hadn’t hung out with my brother in quite some time, so snow be damned, I was going to that game, and if worse came to worse, I’d just crash at my brother’s … we never did get that snow.

Now, I really couldn’t tell you the ins and outs of what happened in the game as I don’t really follow the AHL league. But I can tell you about the people all around me and how they repeatedly forced me into fits of laughter throughout the evening. See, the Heat is the NHL’s Calgary Flames affiliate, and the Moose is the Vancouver Canuck’s affiliate. The Heat is also Abbotsford’s home team, but we on the West Coast do so love our Vancouver Canucks, and last night with the farm team in town, it was like their heads were spinning, not knowing who to cheer for. One second they were booing and the next they were cheering – for both teams. It was a battle of allegiances!

My sister was also at the game with her best friend and their husbands and they were sitting directly across the rink from where we were sitting. Matt pointed her out early on, and whenever I couldn’t find some crazy person to focus my attentions on, or when I grew tired of searching for Alain Vigneault (the Canucks’ coach) in the stands, I’d spy on Jules 😀 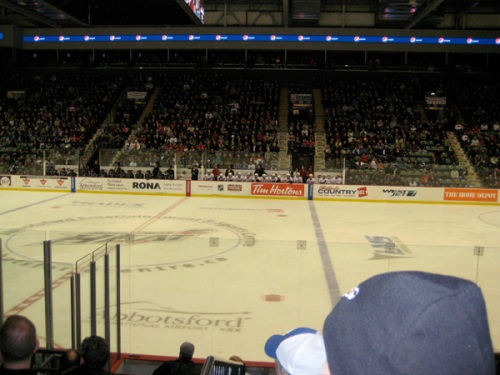 Well, it turns out, she was spying on us a little bit too. In the second period intermission, Matt disappeared for a bit to socialize with a soccer buddy of his and some old-time CFL grey cup dude (I don’t know football, so it means nothing to me). He came back just as the third period was starting, and instantly got a text message from my sister “tsk, tsk”ing him for deserting his baby sister. Let the text message teasing begin. For a good portion of that period they were going back and forth, and finally, Matt sent her a text with just two words: Look up. As soon as he sent it, we stuck our “tongues” out at her. We watched her reading it, which felt like forever, and then finally, Jules and her best friend (who was also reading and contributing to the text messages) craned their heads up so fast, their eyes practically glued the girders at the top of the ceiling for a good five seconds. Matt and I could barely contain ourselves laughing with our tongues stuck out! I was laughing so hard, tears were streaming. Yep, we are evil like that, and I’m sure Matt and I will be getting our just desserts in the very near future. A great day indeed! 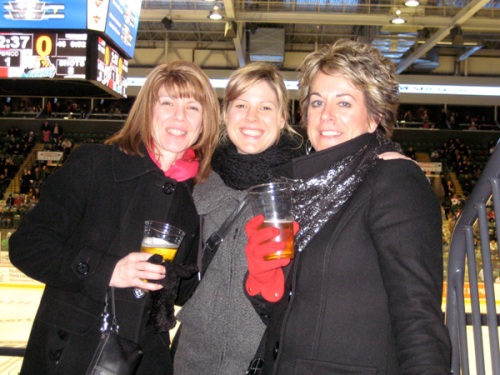 What constitutes a great day for you?