Clips: The Bane of my Cycling Existence

Alright my cycling-loving readers, how many of you struggle with clipless pedals?

I’ve been riding clipped in for six years now; my first ever ride in clips was on the Belgian cobblestones on a proper Flanderian cold, wet day, which was all sorts of scary, especially when the sirens of an ambulance started blaring right behind me in a funky roundabout moments after I started riding and I had no idea what to do beyond veering right and pretty much riding into a parked car to stop myself.

Least I didn’t fall over.

Least there was no one in the car. 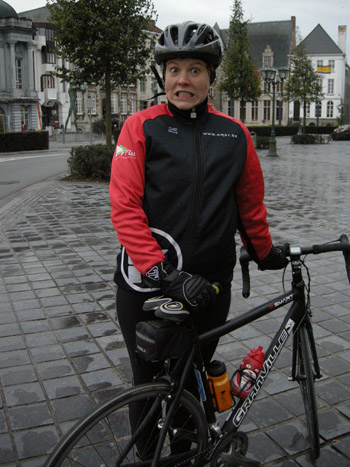 So yeah, six years, and for the most part I’m pretty okay in them. At times I struggle getting my right foot clipped in after a stoplight, but usually the left foot, my leading foot, I’ve got no issues.

I don’t know what the heck’s been going on, but my goodness, neither foot seems to want to clip in. At all. Seriously, practically every time I clip out, I’m struggling to get back in. Sometimes it feels like 5 minutes before I finally hear the desired click of the pedal to cleat.

And let’s just say, that moment you feel like you’re clipped in only to realize a JARRING second later that you’re not when you slam down into your hard-as-heck seat as your foot flies off the bloody pedal – not cool. Ohhh, my poor, poor nether regions!

I thought maybe it was just one ride, I thought maybe it just wasn’t my day, but nope, it was consecutive rides. One ride, I nearly ripped the bloody pedals right off the bike. Not exactly the most rational act, I mean, without pedals, it’s a strider, and, well, I think I’m a little too old for that style.

Big Ring says I’ve been thinking about it too much, focusing too hard on the act of clipping in, and not just letting it come naturally. Maybe I was, maybe he’s right, but wouldn’t you be putting all your energy into it too if say you were stuck at a bloody light for TWO crossings because you couldn’t get your feet in??? Okay, so maybe that was an exaggeration 😉

Since getting back on the bike this season, I’ve tried to have a goal with every ride: don’t get lost; keep good form, back straight, shoulders down, belly sucked in; push the legs; etc. And so, with recent pedal issues, yesterday when I went out for a quick solo ride, I took Big Ring’s words to heart and decided not to overthink the clipping in process. And you know what, the veteran cyclist was bloody well right – not ONE clipping in issue!!!

Now, don’t go thinking I’m gonna start taking everything he says as gold right off the hop; I am stubborn after all 😉

One response to “Clips: The Bane of my Cycling Existence”