It seems I may have hit a nerve with my numbers on a scale post a few days ago, and you know what, I’m glad I did. Because while I knew in my heart that I was doing everything right (I mean, seriously, a girl that eats this much salad while pregnant can’t be in the wrong) on the surface I was beginning to second guess my actions with Ms. Dietitian’s criticism of my weighty outcomes.

Despite my hemoglobin A1c (three-month average blood sugar reading) being a consistent 5.5, which is pretty darn good, and despite my veering away from my love of chocolate and ice cream for the most part throughout the duration of this pregnancy, and massively mowing down on salads galore, when I heard Ms. Dietitian’s words telling me that my weight was far too weighty, all logic flew right out of my head.

I started thinking more about chocolate and ice cream and cookies and pizza. I mean, if I was doing everything right, eating super healthy, being super active, and still gaining more weight than I apparently should be, why the heck not indulge in those oh-so tempting sweets I’ve been forgoing. I kid you not, it was like virtual emotional eating without actually doing it.

Heck, I even had the guilt clouding my every judgement. Every time I was faced with a food/meal option, I weighed every ounce of my decision – is that too many carbs, how fatty is that, what will that do to my ass? Are you freaking kidding me? This is NOT the kind of person I am, and it is the furthest character I should be embracing when trying to cook up a healthy, alien thumb-sucker.

This isn’t the first time I’ve had issues with medical peeps specializing in the diabetes field. And I’ve often wondered if a) they’re either checking out, or b) they have a set checklist that they follow, not keeping in mind that every person is different, every body is different, every file is different.

So, to all of you who left me messages in one form or another, I thank you. You put reason back into my brain. I’m pregnant. I’m eating healthy. My BG is near perfection. And dammit, if I gain a pound or two or more, so be it – I got a strong little kicker in my belly!

And don’t worry Sara, I’ll be sure to get a second opinion if someone out there (beyond me, of course) suspects I’m growing an alien 😉

So, instead of worrying about the weight I’m gaining, I’ve decided to put that energy into worrying about whether or not Big Ring and I will kill this season’s crop of flowers, herbs, tomatoes and strawberries. We don’t have a very good success rate to date, but by golly, we are determined to have at least one thriving crop in our lifetime. 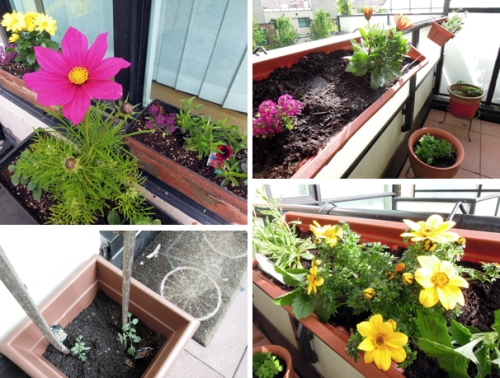 Fingers are crossed this will be our year!