All struggling. All smiling.

You win some, you lose some. And yesterday’s run, much to my dismay, was very much in the loser file.

I could not get my bearings at all. My ankles felt crazy wobbly, and the upper half of me felt as though it was going all over the place too. My breathing was heavily laboured. I was crazy overheating. My stomach innards were flopping. And Dear Diabetes was being a major jerk face!

I woke up at 4 a.m.. I didn’t intend to, my blood sugars went low, and by the time I’d finished slamming back some oj, my brain had turned on, my eyes wide awake, there was no falling back into a slumber. That was just the beginning.

It seems Dear Diabetes is making a habit of getting in the way of my Sunday runs these days with her stupid hypoglycemic ways. So I thought yesterday I’d head it off before it had any chance to begin. I had a full banana, instead of half, 30 minutes before the run. I cut my basal insulin by 50 per cent starting 15 minutes before the run. Two seconds before the run, I chomped on two shot blocks. And instead of waiting 30 minutes into the run before fuelling up with my homemade sports drink, I started right off the hop. Surely that would make a difference. 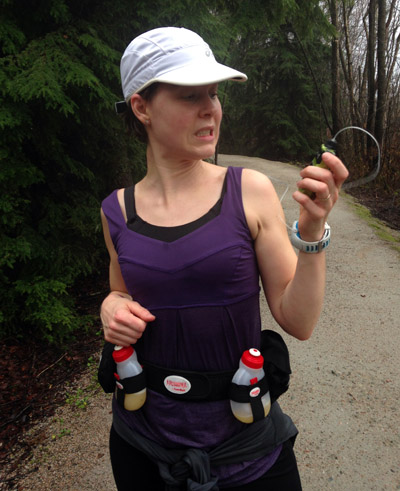 Four shot blocks stuffed in my mouth and every last bit of my sports drink downed in seconds. Hello gut rot.

Yes folks, if the above issues weren’t enough, the last 30 minutes of my run had me dealing with serious gut rot. It took everything in me to keep going, to focus on the running, and not the disaster that was my body. There were moments where my eyes were blurred, and maybe even a few where they were completely shut, as I tried to find my happy place, the zen running zone, the one where my pace is being pushed but I don’t feel a thing. That, my friends, is one of my most favourite places, and yesterday it was so incredibly hard to get there. But the last 20 minutes of this run, despite everything else wrong going on, was spent in that place. That’s a positive. 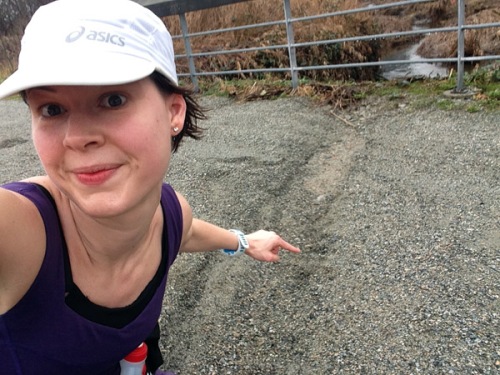 I may have nearly crippled myself running in that place though. Heavy rainfall the day earlier left a few sink holes along the trail. Sink holes and blind running don’t  mix!

As I’m sure you can gather I was pretty disappointed with the majority of this run. It wasn’t just the unfortunate events, it was the fact that this run, in my mind, was to be a measure of how well my training has gone the last couple months. I haven’t written much about it, but with this training program, while it’s not much harder, if at all, than Coach NZ’s program (maybe the hills) I’ve found my consistency has been near bang on, and I’ve really felt I’ve pushed myself well and seen the results in my Garmin stats. And so, with this run, given that the majority would be spent running at half marathon pace, a new speedier pace that I intend to attempt, I made this run was THE marker.

And when everything was seemingly going down hill, I’m not going to lie, there were moments where I felt I failed that marker. But, you know, sometimes there’s just one thing to do: scream at the top of your lungs, EFF IT!!! (Or maybe I did that in my head 😉 )

It was a beautifully muggy morning that felt as though I should be in shorts, not tights; I wasn’t in an area being threatened with the blizzard of the century; I was running with some of the loveliest running chicks around; I was running.

Parts of it were crummy, yes, but other parts were pretty freaking fantastic… like this moment: 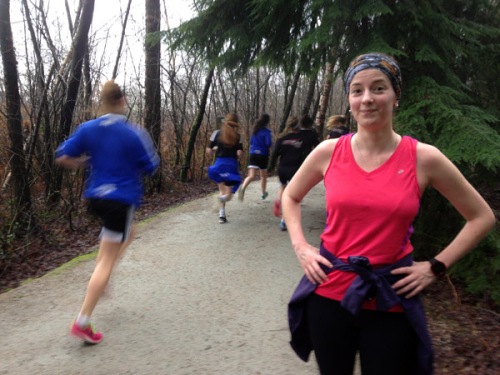 Being chicked by a high school girl’s soccer team and both of us thinking: Give it 10 years, then let’s see how fast you are! 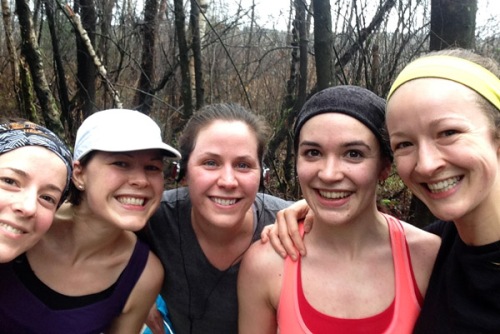 A mid run stripping of the layers. All struggling. All smiling. I LOVE THESE GIRLS!!!