Have you ever had that split-second feeling where just as you’re doing something you realize, oh crap, I so should not have done that?
I have – just as I was ripping my insulin pump infusion set right out of my body!
How, you ask? Well, the other night, at the insulin pump information session, I asked Jonny White, the cyclist, where he put his infusions to best avoid blood filling the canula, like what happened to me last week when I was cycling. And he said that he usually inserts them into his abdomen (where I had mine) or the fleshiest part of his butt cheeks.
So yesterday morning, when I was changing my site, I figured I’d give the ol’ butt cheek a try. We were planning on going for a ride that afternoon, so I figured it was the perfect opportunity. It was a little awkward inserting it, twisting my body trying to see exactly where the needle was positioned, but it seemed to work nonetheless.
But not even two hours later, as I was looping my thumbs into the waistband of my pants and pulling them down, to change into my cycling clothes, I pulled the infusion right out of the skin – OUCH!

Seriously, these things are not exactly the cheapest items ($178 for just 10 in a pack), can’t really be wasting them like that.
However, had I fully listened to the cyclist, maybe that would never have happened. He also suggested using Skin Prep, which is supposed to keep the tape tacked onto your skin better … obviously, I ignored that suggestion. I didn’t like Skin Prep when I tried it early on in my pump days – it dried my skin right out, and I struggled getting the needle through the skin, which I did NOT like at all! I mean, seriously, how much would you like trying to jab something through and it ain’t going through? Not fun at all.
But, given what I had just gone through, and given that I was going for a bike ride later on, I figured I’d give my butt cheek and the Skin Prep a second chance (I still had one left over from when my pump nurse gave me a couple to try when I first switched over to the pump).

So far, so good. It’s still in 24 hours and a bike ride later, but I’ve worried about it every single time I’ve gone to the washroom or changed my clothes. Maybe I need to post a list of things NOT to do on my bathroom mirror in big black ink as a nice little reminder. 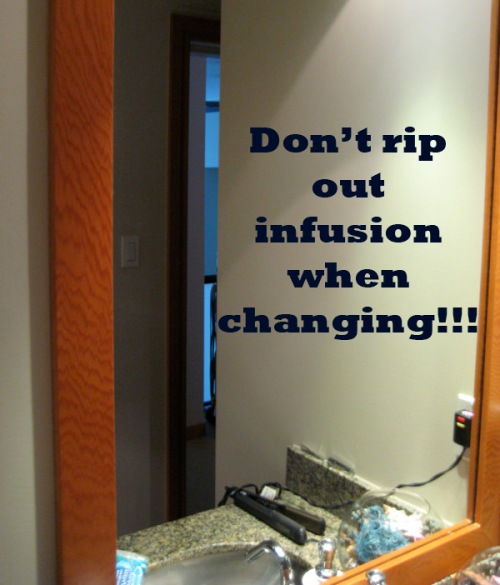 More on the bike ride tomorrow …