I don’t want to brag here (okay maybe I do) but my body, it’s a machine – and not a broken-down machine 😀

Yesterday morning Mario and I, and a buddy of ours, went for a bike ride out to Pitt Lake. I was a little nervous about the ride, given that I’ve really only ever ridden with Mario or by myself. What if I couldn’t keep up? Yes, despite cycling for three years now, I am still super self conscious, and maybe even a little overly competitive, about my riding, not wanting to be the “autobus” of the ride. My worries were not unfounded, I was, in fact, trailing the pack for the majority of the ride. Mind you, when Mario and Rich surged forward straight into a headwind with man-iron legs, as much as it was irking the hell out of me that I couldn’t do the same, I was also refusing to even try, knowing that I had a 16 km run waiting for me this morning. I did not want to burn myself out.

I may be the autobus now, but just wait 'til we hit the hills ... teehee.

We weren’t planning on going all the way out to Pitt Lake (Rich and I aren’t crazy like Mario who goes out and does 100 km rides like they’re nothing) but when we got to where we were going, Mario said Pitt Lake really wasn’t that much further, just 3 km more, we might as well go, he said. However, he did NOT inform us that those 3 km would be the Pitt Meadows version of the Belgian cobbles: Bumpy as hell! My teeth were chattering, my body was shaking, and when we stopped at Pitt Lake my hands were beet red, almost purple even. 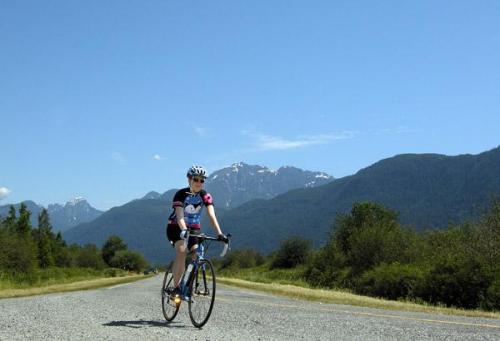 Cycling over the cobbles on the way back, which were a bit easier than going out – the other side of the road was just horrendous!

After riding over the Pitt River bridge and into the Pitt Meadows region it was seriously like we had been transported into a whole new world of country music, big trucks with big tires, Harley-riding chicks with “tramp stamps” as the guys called them and – are you ready for this? – a woman who decided to go for a run in heeled flip flops and bright red, Daisy Duke style shorts with HARD CANDY written across the bum – what was she thinking??? 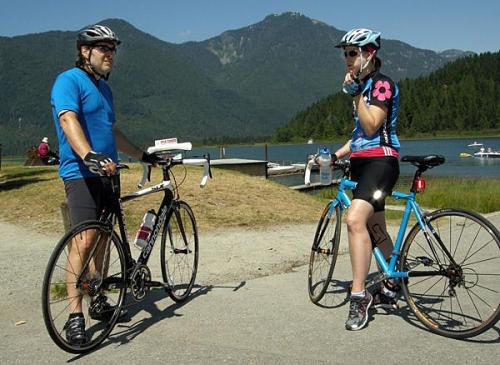 Pontificating over Hard Candy chick and the rest of the P.L. Posse

After we had lunch and I downed a Happy Planet energy shot (I won a whole bunch of them in a contest recently … more on them in the future) I was feeling some major kick in my legs for the rest of the ride. And while I may have been the autobus for a good ways, I had a nice breakaway on the bridge and surged right past Rich up the hill. Have I mentioned I love hills? Well, I do 😀

Even though I jolted up the final hills, though, Mario won the polka dot jersey for the day: King Of The Mountains! But for this picture, he was just showing off snapping it while riding his bike 😉

Not too long after the ride, I was feeling a major throbbing in my right hip joint, and nothing was taking it away, not a hot bath, not Advil, not wine, nothing. So I was a little worried as to how I would fare for this morning’s run. But when I woke up, the hip was no longer throbbing, I just had a bit of a tight feeling in my butt, which I figured I could live through.

It was just Lori (my trusty running partner) and I this morning, and we started out leading the pack for a good 3 km before the “quickies” finally decided to devour us and spit us out in one fell swoop … normally, they’re all over us within seconds, so we were quite proud of ourselves. Although, when we heard their footsteps coming up behind us, I swear we sped up trying to hold them off for as long as we could, not wanting to let go of our early victory.

That good start, I think, was indicative of the whole run, which was great. I had no pain, I had energy and oomph, and there were no thoughts of oh man when is this going to end. In fact, when there were just 2 km left to go, I even said to Lori, “Wow, it sure doesn’t feel like we’ve gone this many kilometres already, hey.”  That’s what happens when you have a great running partner such as I do, and we’re able to just chat and chat the whole run away.

Now, that being said, when I got home today, I did a little math (shocking, I know!) and discovered that on Sept. 12, the day after Mario does the Gran Fondo bike ride from Vancouver to Whistler (and the day after our one-year anniversary :D) I will be required to run 29 km ALL BY MYSELF!!! Yikes!

How do you get through long runs when it’s just you and your sneakers?