For a day that was so crummy yesterday, it was sure golden today.

First, I found a smile-inducing note from Mario attached to a couple of surprise chocolate wafer cookies in my lunchbox that I had no idea we even had = yum! And then, five minutes later, I got an email from a work contact regarding a story I’ve been wanting to do for two years, but couldn’t because the timing was never right, telling me to come down this afternoon, to which I was totally free. And then, I walked outside to my most favourite season of the year, which consisted of beautiful sunshine and trees brimming with orange, red and yellow leaves, some of which had already started to crowd the sidewalks. And then, the cherry of it all, I became a real, bona fide journalist this afternoon – at least in the eyes of Earnest Hemingway.

I drank on the job! But it was for the job, so I can’t get fired! Perfection 😀 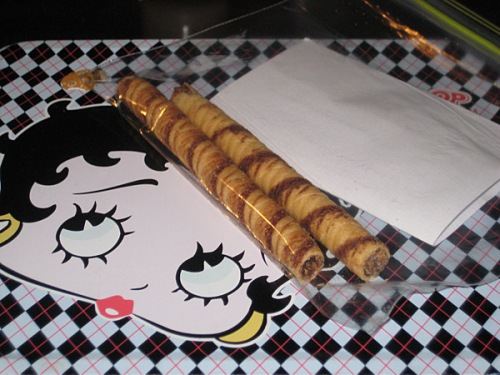 The perfect start to an almost perfect day.

However, while my day was pretty close to being perfect, my body was not. I  think it’s rejecting me. See, I’m a worrier, it’s in my nature. I overthink things, I stress over things, I freak out over things. And with that, so do my blood sugars.

Over the last couple of weeks my blood sugars have been on a roller coaster ride of a lifetime, seriously rebelling against the body (that would be mine) they inhabit. And I couldn’t figure it out. I haven’t strayed from my regular diet, which consists of a good assortment of healthy foods (for the most part ;)) that I’m pretty well versed in with carb counts. And I have been engaging in a good amount of activity that’s been fairly consistent over the last several months. And yet, I’ve been dealing with highs and lows, but very rarely perfection. And it doesn’t matter how much I analyze the readings or how much I try to correct them, they just keep going up or bottoming out.

And for someone, who over the last few years has become rather OCD in producing perfect numbers, I’m sure you can imagine how much I’ve been freaking out. 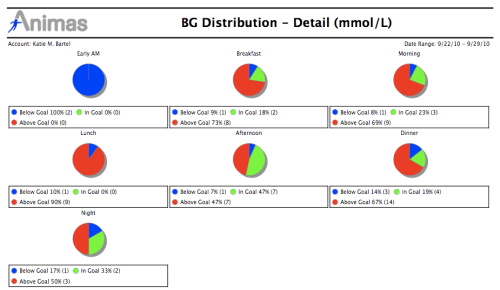 The colour red = not so good. And there's a whole lot of red in those pies 😦

However, just like how the Garmin averages out, so do the blood sugars. And while the averages (the bottom line) are still not perfect, they're a lot better looking than that damn colour red!

It wasn’t until I sat through my first school board meeting of the year last night and tested my blood sugars midway through only to find a result of 13.2, eight points higher than where they were just two hours prior, that the cause suddenly dawned on me.

See, I started thinking about how all last year, when I was producing consistently perfect numbers, the one struggle I had was on the nights I had to cover school board meetings. Now granted, my dinners on those evenings are diferent from the dinners I have at home, but I usually go to a place where I can grab a sandwich, something that is fairly easy to calculate the carb counts for in figuring out my insulin dosage – and yet, they were almost always high two hours after said meal. And once I started thinking about that, I started to remember a conversation I had in the spring with my endocrinologist who pointed out that stress is one of those many factors that can throw us diabetics and our blood sugars for a loop. And while I wouldn’t necessarily say that the school board meetings themselves stress me out, thinking about how long those meetings will inevitably be, and thinking about the hour plus drive I have to make following the completion of those meetings, that stresses me out.

So now we’ve come full circle. Marathon Day stresses me out. Stress stresses my blood sugars out. So pretty much, I’m doomed right up until I cross that finish line … oh wait, then I’ve got a plane ride to stress about 😉

How do you calm the stresses in your life?

I thought massages were supposed to be relaxing and calming and soothing and the whole nine yards. I thought they were actually supposed to feel good. Because if that’s the case, I sure got the short end of the stick yesterday. I think my massage therapist had some major pent-up aggression to pound out, and my body was the closest thing to pound it out on. He grinded his knuckles into neck aches I didn’t even know existed; he pummeled the soft spots out of my back; he crunched my ankle back into alignment; and reefed my leg out from being jammed up into my hip (apparently that was the impetus for the knee ache). And as I scrunched up my face, held my breath, winced in pain, it was as though he had found his heaven.

Despite the beating, though, it was a good visit. My massage therapist is a well-versed runner (and a talker – there’s no falling asleep on his table) and he recommended I deviate from my current training plan. He thought it was a good idea my decision to skip tonight’s speed work (woohoo!) and he told me to play it by ear regarding tomorrow’s run. If I feel okay, he said to go out real light and easy, and to see how I feel after 3 km, if I feel any kind of twinge, to turn back and not complete the 10k. He also told me that for Saturday’s 16k at race pace, not to do it, sort of. He told me to run the 16k, but for the first 12k to go out light and easy, and if I’m feeling good after that to give her for 3k, and then ease her up again for the final 1k. But it all starts, he said, with how I feel.