Being a rock star diabetic does have its drawbacks – like when you’re looking for medical expertise and the professionals look at you like you’ve got snot hanging out of your nose. They have no idea why you’re there or what to do with you. Now, I wouldn’t say that’s 100 per cent what happened to me today, but it would probably amount to 65 per cent.

When I made the appointment with the insulin pump nurse and dietitian two months ago I was in dire straits. My blood sugars at the time were doing everything but being perfect. They were low. They were high. And nothing I did made them better. It was probably a good three to four weeks of blood sugar insanity before finally something in me clicked and I was once again on the BG perfection train. And just as I had no idea what set off the insanity, I also had no clue what brought back the perfection. I was just happy to be back in the diabetes good books.

So, instead of going to the appointment today looking for them to better my condition, I went looking to better work it with my training. The dietitian was awesome. We went through my usual meals, and she told me I was pretty bang on with my carb counts, except for my morning oats. I had been calculating them from a cooked portion, but it turns out, I should have actually been calculating them from the dry oats, something that was pretty near impossible for me given that I suck at math. But the dietitian called Anita’s Organics, which supplies my oats, and found out the nutritional values, then did this Sheldon-like equation based on the amount of dry oats I cook, and how many days the batch lasts me, and the fibre count, which equalled 12.5 grams of carbs per serving. I had been calculating 20 grams. No wonder I was having mid-morning lows!

She also recommended Praventia bars as a granola bar option as they release carbs slower than other granola bars. She suggested I drop my temp basal rate on runs to -30 per cent instead of -50 per cent. She told me to check out the Children’s Hospital diabetes site because apparently they post all their handouts on the web. She gave me carb-count handouts for baking supplies, which as we all know is huge for me. She gave me a copy of Pumping Insulin, also known as the Insulin Pumper’s Bible. And she told me to email her anytime I had a question. Awesome dietitian!

Unfortunately, however, the nurse didn’t really help. I was hoping to get some suggestions on how to avoid post-run highs (about two hours after the run) which I seem to sometimes be susceptible too. She suggested I do a longer temporary basal rate to the effect of having a temp basal two hours before and two hours after, which made no sense as my problem was with high blood sugars not lows. Good thing I had the above-mentioned dietitian suggestion to fall back on.

Here’s what I think: the professionals in the adult-oriented diabetes centres are so used to seeing diabetics who are in poor condition, they have no idea what to do with someone like me who’s in great control. And the kids, they get most of the diabetic nurses and doctors who are on the leading edge of the disease. I need a youth serum 😉

After the appointments, Mario, who had been perusing the fancy bike shops, and I walked up to Granville Island to get some mussels for tomorrow night’s paella (yum!) and blackberry tarts for tonight’s dessert. I wish we had a market closer to home; I love market shopping. Feels so Euro! 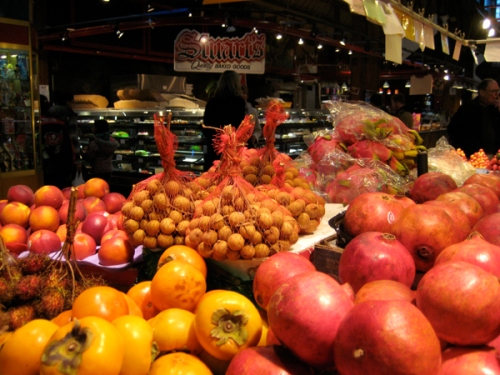 Where is the best market you’ve ever shopped at and what made it the best?