Battle of the feets

Today was one of those days. I was pretty miserable for a good portion of the day, didn’t want to talk to anyone, didn’t even want to look at anyone, at one point I thought I was having an anxiety attack, and another I thought I was going to break down. I can’t really explain it, I don’t often have those kind of days (yes I have stressful days, but not so much rubber room days) but I knew something was off when I was already reaching into my chocolate drawer at 9 a.m. And it’s days like these where a good hard run is the only medicine.

But before I get to that, I have a rant, oh do I ever. Look at these pictures: 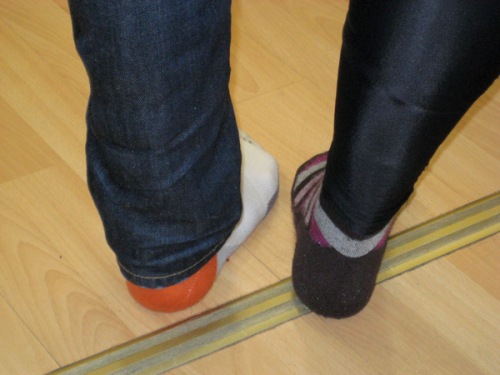 Two feet. My foot and Greg’s (best shoe fitter EVER). Today, the both of us took our feets (at different times) into Kintec for a gait analysis. I had no idea what Kintec was before going, I thought it was a sports medicine place given that the walk-in clinic doctor had referred me. But when I walked in, I quickly discovered that no it wasn’t a sports medicine place at all, it was an orthotics first place, and pretty much from the second I arrived, I was getting the sales pitch.

They had me take my shoes off and walk on the treadmill for four minutes of which they videotaped and then showed me how my ankle caved in … in other words, pronated, something I’ve known already for years. The pedorthist (whatever that is) then continued to sell me on the idea of orthotics (of which he said I would need a separate set for every shoe – at $430 a piece!!! – despite the fact that I only have issues while running) and was practically laying the clay mold before I had to stop him: “Whoa, I’m not ready for that.” I begrudgingly paid the $80 assessment fee and left hoping my extended medical would cover the cost.

As I was walking out, Greg was walking in. I saw him about 40 minutes later at the Running Room, where he informed me that he had just walked in, whereas I had to make an appointment, asked a few questions, they got him to walk on the treadmill, videotaped it, assessed it, the same as they had for me. But do you think he had to pay $80? No. Not one penny! What the F? Are you kidding me? I mean, sure this kid has cute eyes, but I’m not too shabby myself – what gives? Do I look like I’m rich? Do I look susceptible for getting ripped off? How is it I got fleeced but Greg didn’t?

How is this acceptable?

So, needless to say, I was definitely in need of a good solid run. And it just so happened I had a date with my favourite Ironchickie STAR!

We were so busy catching up as she only just returned from New Zealand a week ago and I haven’t seen her since the summer before she headed to Hawaii for the Ironman World Championships that I totally forgot to get a picture. We had her wedding to talk about, my new nephew, our world travels, my marathon, her ironman, our training, new jobs, future plans, audiobooks, so much, and snapping a picture just didn’t come to mind in the two hours we were together. So, lucky for me, she has the best race picture EVER and was more than willing to share it with you my readers. This picture was taken as she finished the running portion of the Kona Ironman in October where she had shaved 2 minutes! off her previous best marathon time and felt great right to the finish line … AFTER already swimming 3.8 km AND cycling 180 km!!! She is Iron-Superwoman!!!

And when the run was all said and done, the smiles had returned.
Running with friends = best medicine!

3 responses to “Battle of the feets”