Everyone told me not to do it, that I’d be far too uncomfortable, miserable even, but I didn’t listen, oh no. Me and my pretty girl gumboots were out picking berries yesterday afternoon in 30 degree heat, oh yes we were. And we looked pretty darn cute doing it too! Life is about fashion after all isn’t it 😉

Mario bought me the gumboots for Christmas three years ago and I haven’t had much opportunity to wear them as they sometimes cut the circulation off in my legs (not good) and really you need the right event to wear them to; they’re not just any old gumboot.

I came close, last summer, of being able to wear them to a girlfriend’s outdoor wedding. The morning of the wedding, the rain was coming down in buckets and as I put my frilly sundress on, the excitement in my belly grew. Today would be the day, I thought, my pretty girl gumboots would finally be matched with a style they deserved. But no, the weather gods were not in our favour. By the time we reached the wedding locale the rain had disappeared, and the beautiful sunshine appeared. Boo 😦 Er, I mean, I’m so glad my girlfriend got her beautiful rain-free wedding after all.

A couple of weeks ago, when my girlfriend Shona suggested I come blueberry picking with her pilates/wine-drinking/running/martini-drinking/zumba girls, I figured it would be the perfect gumboot occasion. And yes it was, despite the sweaty legs!

I haven’t picked berries, aside from watching my moms pick blackberries for me every year from her bushes, since I was maybe 13. And back then, it was a job, where I actually got paid and inevitably got asked not to return after just one day’s work. Apparently I didn’t heed the constant reprimands regarding not picking the bushes clean, and for eating more berries than I was picking, and for padding the crates with leaves and such before they got weighed. Seriously, what do you expect from a 13-year-old?

This time around though, while I was still operating on the one berry for the bucket, one for the belly method (organic, no spray berries = big berry bellly) I was NOT padding the bucket, and I WAS seeking out the most delectable berries. And it wasn’t like work at all, not even when my head nearly got decapitated by two intertwining berry branches, or when the berry blew up in my hand, or even when the icky spider went crawling down my sweaty sports bra … I may have let out a high-pitched screach, but I did NOT run away crying. A perfect girls get together. 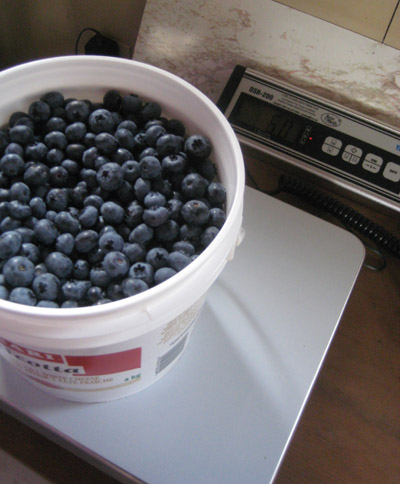 After about two hours in the fields, we averaged about six pounds of berries each, and called it a day. The hard work had us sitting on the patio at Earls not even 15 minutes later for lunch and a refreshing drink.

Unfortunately, however, instead of choosing a trusty pint of beer (of which I know has 10-12 grams of carbs in it) I opted for a more girly mojito – but only after the server assured me there was no added sugar in there, that it was made from all fresh ingredients, and even repeated ‘no added sugar.’ Given my history of people telling me there’s no sugar in something when there actually is, I was skeptical when I first got the drink, and so I took a small sip. It was tart, like really tart, refreshingly tart, not sickly sweet. I put my trust in the server, I put my trust in the mojito. My blood sugars, however, two and four hours, later told a completely different story. My BG before lunch was 10.6 (probably a result of the one for the bucket one for the belly operation) two hours later it was 14.4, and two hours after that it was still 13.1 – even after I had given myself a 2.50 unit BG correction.

Anyone know how many carbs are in an Earl’s mojito?