Want to know a secret? Do you? Do you really want to know? Okay, I’ll tell you: I can keep a secret! SURPRISE!!! 😀

This was a questionable thing. My family has never been good at keeping secrets, we get so excited about things that we are just bursting at the seams to spill the beans. It comes from the top. My moms  is the worst (sorry moms!). She tries to keep her mouth shut, tries with all her might, but she just can’t do it. Case in point: Christmas gift exchange. Every year my family draws names, and a good portion of us try to guess who has who. Obviously I start with my moms. But this year, she swore up and down that she was not going to tell, oh no, “it was a secret,” she said. But without further prodding she continued, “all I’ll tell you is I’ve never had her before.” That wasn’t all she told me. She then informed me that I was not the ‘her.’ When I offered up my sister’s name, her smile grew wider and her eyes brighter, but she still tried to keep up the game, “noooo,” she giggled. Mystery solved.

But me, I proved this past weekend that I can, in fact, keep a secret buried deep within – for two whole months!

As some of you may recall it was Big Ring’s birthday a couple weeks ago. It was a big birthday, one in which he became “no longer significant” in the Nielsen ratings (a tragedy according to him… seriously, he was watching mondo amounts of TV leading up to the big day!). On his birthday, I made him an epic four-hour dinner feast, but that was all just a ruse, a very long, drawn-out ruse mind you.  I was planning a big SURPRISE birthday bash for him to be held two weeks later. And oh man, I thought for sure I was gonna let it out, or someone in my family would slip up over the holidays, and it almost happened, but he was none the wiser.

On Saturday evening, under the guise that my parents were hosting an appetizer get together of friends and family (which they often do to test out new recipes), I got him to his party. And it’s a good thing the room was full of photographers as I forgot my camera at home. D-oh! (Thanks for the pics EvanMan!) 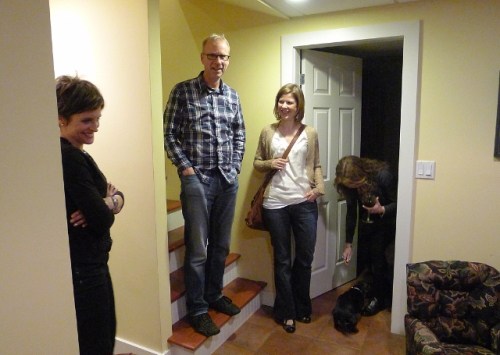 When he walked down the stairs and was greeted by a bunch of his buddies (behind the camera) he was dumbfounded, “What are you guys doing here,” he asked. SURPRISE! 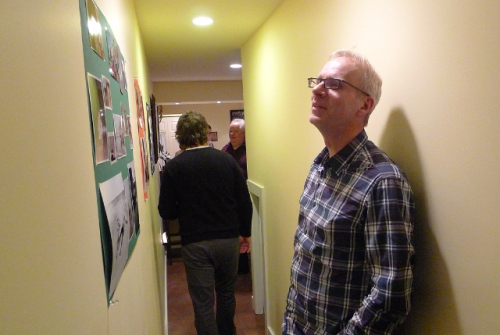 Checking out the Wall o’ Photos, of which I had to tear our loft apart to find, as well as enlist his mom and sister from the Onterrible to mail some oldies out. Totally worth it! 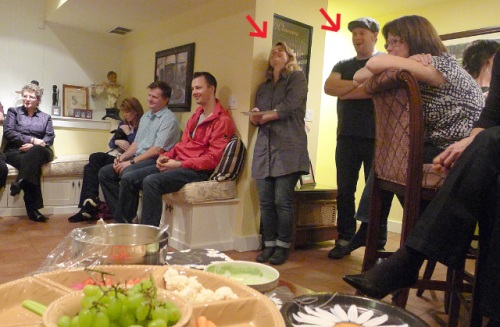 You see the couple with the red arrows above their heads, their son (I think he’s 6) has diabetes, and it was great listening to them talk about how adept he is at using the pump… take it from me, the younger they learn, the better off they are later in life.

This one says it perfectly doesn’t it: SURPRISE!!!

In other news, with regards to my last post, I have decided not to affiliate my blog with the Werthers-CDA community. For me, there were just far too many drawbacks in associating Princess of Pavement with big business. I think if I really want to be associated with a true diabetes community, I should be looking at those that aren’t trying to push a product. Thank you all for your thoughtful responses, they truly helped in the decision making process.

To my diabetes blogging peeps: Do you belong/subscribe to diabetes specific communities?