I’m not Brittany, and I’m not Christina. I’ve run marathons, half marathons, countless other races. I’ve ridden up the demanding hills of Horseshoe Bay on my bike, and twice in one day up Jericho. I can climb the Grouse Grind in a respectable 55 minutes. And I thought, as scary as the prospect is (just like all those other things once were) I could surely compete in childbirth too. The docs, however, seem to have other ideas.

A couple weeks ago my obstetrician asked what my intentions were regarding childbirth. It’s not the first time I’ve been asked this question, so I was prepared, and instantly said I wanted to go the natural way. She gave me a questionable look (apparently the size of my  thumb-sucking alien baby is cause for concern) but left it there merely saying, well we won’t know whether the baby will be able to fit until the time comes.

Fair enough. I knew I had a big baby, and sure it scares the bejesus out of me to push that sucker out, but everyone in my immediate family has had big babies. And my hips look to be far more child-bearing than my mom’s and sister’s who were both rail thin when they got preggers. But then last week I had to see a different obstetrician and she pretty much stuck the fear of God in me.

She spent a good 10-15 minutes going over the dangers of me going through vaginal childbirth.  She told me that my last ultrasound showed a baby with a belly in the 95th percentile, while the rest of it is within the 50th percentile … so pretty much I’ve got a pot-bellied baby!

She said when you’ve got a ‘husky’ baby you run the risk of presenting shoulder dystocia which is when the head makes its way out, but the shoulders get stuck under mama’s pelvic bone. If that happens, she described a chaotic “emergency style” delivery room with doctors and nurses everywhere trying to manipulate the baby out by doing things like pushing mama’s knees back or the docs trying to pull the shoulders out from under the pelvic bone (uhm, OUCH!). She also noted there’s a possibility the baby’s collarbone could be broken! Not cool 😦

And she prefaced all that with: “I’m not trying to scare you, but ….” Are you freaking kidding me? Seriously, I’m beginning to think they get a thrill out of seeing my eyes grow so wide they nearly pop out of their sockets!

Damn these doctors, not only do they make me wait for 50 minutes before seeing me (my appointment was at 3!) they set off a flurry of worries!

I left that appointment feeling pretty damn despondent. I mean, if my family is built to have babies as my moms has said for as long as I can remember, what the hell is wrong with me? Why was this shoulder thing never once mentioned to my moms or sister-in-law, who are both five-foot nothing and had ginormous 9 pounders? Why were c-sections never once in the cards for them? And it can’t just be the diabetes, because my sister-in-law had gestational diabetes for all her pregnancies? So what the hell is wrong with me?

I know a c-section isn’t the worst thing that could happen to me, and I know some super strong women who had to undergo c-sections for various reasons, but when you’ve heard your whole life your body was built for baby bearing, and now that’s potentially being snatched away from you, I don’t know it feels like a DNF or a DQ… a failure. And the worst part is, I feel I’ve done everything right. My blood sugars have been near perfect, I haven’t over indulged in sweets and fatty treats. I just don’t understand where I went wrong. And that sucks!

We haven’t made a final decision yet, we’re going to wait and see what my next ultrasound on Aug. 23 reveals. The OB said if the baby appears to be 10+ pounds (are you freaking kidding me? How the heck does it go from 5 pounds to 10+ in one month???) then we’ll need to have a serious discussion about the risks and benefits for both sides… 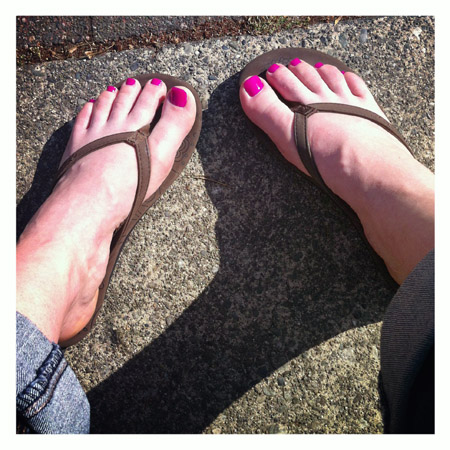 Otherwise it would have been tears city, and we can’t have that now can we 😉