I’ve run marathons, ridden my bike up the seemingly never-ending hills to Horseshoe Bay, competitively hiked the Grouse Grind, have raced dragon boats, and now I have set forth a new challenge – in the kitchen!

This past Christmas, my pops (who drew my name for the family gift exchange) got me a subscription to Cooks Illustrated and Cook’s Country – both products of America’s Test Kitchen. Some of you familiar with my blog might be wondering why the heck he would do such a thing. It’s no secret that while I love to bake, I don’t like cooking, I’m no good at cooking, I cook but once a year, and frankly I’m much happier out of the kitchen than in.

Yup, I can pretty much count how many times I’ve cooked on one hand!

And when I do get into the kitchen for that once-a-year Big Ring birthday feast, despite the cavalcade of curse words exiting my mouth and stress beads streaming down my forehead, I do enjoy the planning of the event, the shopping for supplies, the challenge of not poisoning us, and the reward if it turns out tasty.

With all that in mind, my pops figured I should have subscriptions of my own to enjoy, and he hoped that  maybe, just maybe, I’d find my way into the kitchen more than once a year (he’s a pretty fricken kick-ass chef himself, which most definitely was not passed down to me!). Shockingly, I am happy to report his plan – so far – has worked!

I have embarked on a new challenge, my friends – a cooking challenge. With each magazine I receive (12 in total for the year) I will set out to make at least one recipe from that issue. It may not be 42.2 km, or 8 hours through the Cinque Terre, but it will be grueling, it will be stressful, it will be time consuming, there will be curse words, there may even be tears, and my gawd, there may very well be moments where I want to throw myself in front of a moving train like I did for the Portland Marathon. But always one for a challenge, I promise you this, I will be sinking my teeth into this one 100 per cent!

And already, I’m two for two 🙂

On Feb. 1, I made the Impossible Ham and Cheese Quiche, which was super easy and super tasty. The parmesan crust was brilliant, and the smell that hung low in the loft for hours after was delectable! I’ve since made the quiche a few times more, and have even been so brave as to make my own alterations to the recipe.

And yesterday, in honour of the first day of spring, I made the Easy Asparagus Tart. Big Ring, who was unsure if he’d like the black kalamata olives in the recipe, raved about the tart practically with every bite he took. And while I too thought it was tasty, I think it would have been much better as an appetizer cut up into smaller squares. Me and the, uhm, goat cheese, it seems, don’t really get along, not at all… let’s just leave it at that 😉 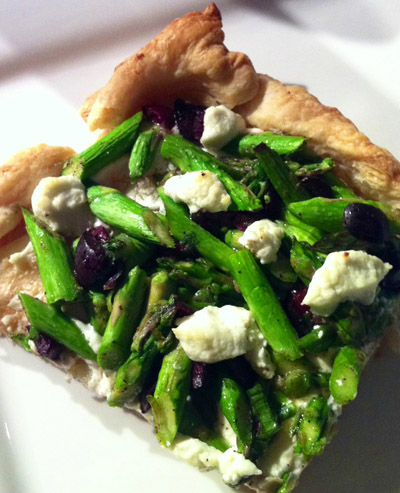 And so, with this new challenge, I will be starting a new page on the blog that will include each recipe I try. Stay tuned for the next cooking adventure.

Ps. this is NOT the big announcement I had teased you all with a couple weeks ago; that will hopefully be revealed in just a couple weeks. Patience, they say, is a virtue 😉