THIS: Ah bananas, they’re like the runners’ go-to fruit. So many benefits: instant energy boost, spiked full of natural electrolytes, and easy to digest… maybe a little TOO easy.

For me, bananas have never really been a first choice. I’m quite picky on the type of banana I eat. It cannot have any indication of brown spots forming, but it also can’t be too green. Really, it’s a small window for bananas and me. And following a hard-run race, I can’t even look at a banana, not even at a fully skinned banana; they induce an instant urge to hurl.

But on Sunday, just before heading out for a quick-paced tempo run, I noticed my BG plummeting. I needed something quick, and I needed something easy on the belly. The only thing that came to mind was banana. Half of it in my mouth and out the door I went.

I kid you not, not even five minutes later and my belly was pissed off grumbling, not quite writhing, but enough for me to know an angry war was building within. It didn’t bother me too much on the run as I was pretty focused on trying to keep up my pace. But man, the second I stopped, BAM! it attacked. I could NOT get to a washroom fast enough.

Now, you might ask me what else I ate prior to going out, maybe there was another culprit, but no, there was nothing, other than banana, out of the ordinary… and this isn’t the first time. In the last month, I’ve had a couple bananas and they’ve attacked every time. Coincidence? Nah.

No more bananas for me! 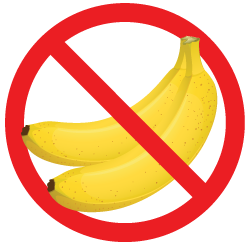 THAT: I didn’t realize I could bleed so much.

The other night, while watching the first episode of Game of Thrones, I was lying on the couch when I felt an uncomfortable sensation in my arm, right at the area of my infusion. I didn’t think much of it, just shifted my body so as not to continue irritating it. A few hours later, I glanced down at said arm, and HOLY FREAKING BLOODY HELL! My infusion site was on the verge of exploding!!!

When I removed it the bloody volcano erupted – blood gushing, shooting straight up into the air, splattering all over my bathroom counter, sink, floor, even my pants and slippers, and streaming down my arm. I practically went through an entire roll of toilet paper trying to sop up and cauterize the bloody mess gushing out. 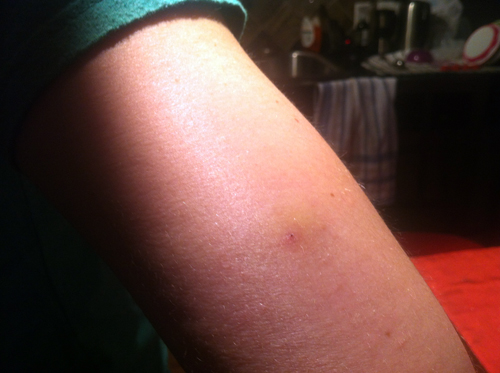 The bruised remnants of a gusher.

THE OTHER: I went for a hard interval run after work today, the same day as doing a hard noon-hour yoga session. I’m not sure it was the wisest decision, but I chose to do it because yesterday was mucky wet and today was sunshiny beautiful. And you know what, despite my legs feeling like jelly right now, I actually really enjoyed it… that is, once I was done 🙂