Okay, seriously, who actually carries around a backup insulin plan if their pump fails? Be honest.

For as long as I’ve had the pump, when I’m out, I’ve solely relied on the pump. I don’t carry a pouch with extra infusions or syringes and spare insulin for just in case (in this heat, would it really survive anyway). I guess you could say it’s almost like a diabetic’s version of Russian Roulette.

And today, I nearly got the bullet.

It was new infusion day, and as is always the routine, I changed my infusion first thing before breakfast. I also changed my CGM sensor, so I didn’t have access to an approximation of my blood sugars for two hours after doing so. It was a busy morning, I didn’t really have time to think about what my blood sugars were doing inside me until snack time three hours after breakfast. It was 8:45 a.m., I stabbed my finger, waited 5 seconds, and HOLY FREAKING CRUD MONKEY!!! They were 17.4. A second test had them at 18.1.

I pushed my snack aside, there was no way I could eat with the highs already shooting through me. I checked my pump to make sure I’d given my breakfast bolus, which I had. I dialed up a correction dose and waited.

Maybe I put too much faith in my pump, probably, but I kept thinking, it’s going to start working. My new infusion site, which was located in the softness of my belly, looked fine; there was no blood, no angry redness, no protruding canula, nothing that I could see that should cause alarm. But something WAS wrong.

Because my office is an icebox, I pretty much always have a cardigan on, but the blood sugar dramas were having me feeling like I was going through menopause. I was sweating, uncomfortable, suffering ridiculous hot flashes. Finally, at around noon., I tore the cardigan off, anddddd – oh look, there’s my old infusion site still stabbed into my arm!!! 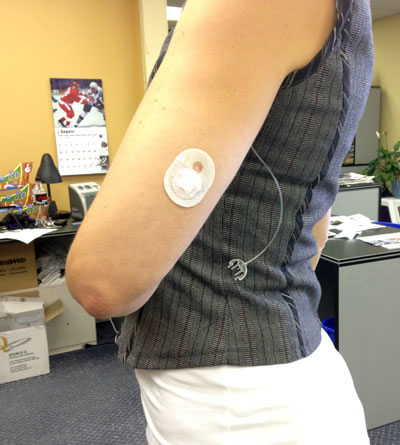 Again, with the honesty, I have to be one of the laziest diabetics when it comes to removing old infusion sites (and probably other things too… like throwing out blood testing strips). They’re often stuck in there for at minimum an extra day, sometimes three. Big Ring even mentioned that I’d forgotten to remove it this morning, and still I didn’t remove it.

Today, my laziness became quite fortuitous 🙂

And when my BG finally started bottoming out around 3 p.m., hells yeah I deserved some chocolate for the ordeal!

My intention with yesterday’s run was to not get lost, which meant no charging off ahead of the group, and to power up the hills, kick those hills’ butts like they’d never been kicked before! And when I came out of the trees, I was so super satisfied with the run. I didn’t get lost, even after I sped ahead for the final stretch, AND I put serious huffing and puffing effort into those hills. Good job me! 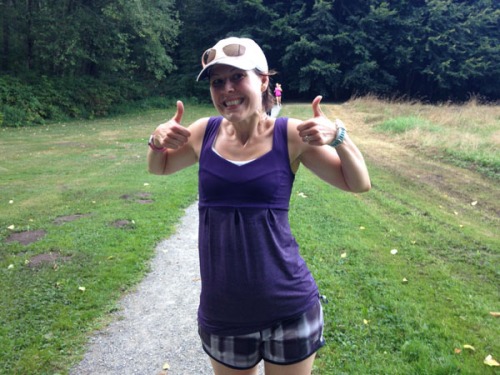