2011: I was training for my second marathon, and struggling with a sore ankle every time I ran. I spent months in physiotherapy with no relief. Dear Physio was getting frustrated; I was beyond frustrated.

Both outcomes resulted in bone scans. In 2011, it turned out I had stress fractures in both ankles. In 2016, well, as I’m currently writing this post in the waiting area of nuclear medicine, I don’t yet know the results.

What I do know:

At 9 a.m. I was injected with a blue radioactive tracer containing phosphate and technetium. The phosphate is treated by the body as a building block; anything broken, stressed, out of alignment, not as it should be is a hot spot trigger for the phosphate and will glow brightly under the scanning camera. They took a few pictures right off the hop to see how the body reacted to the dye, if there were any blood irregularities, etc. These pics, which I could see forming on the screen, made my feet look like sparkly glass slippers. 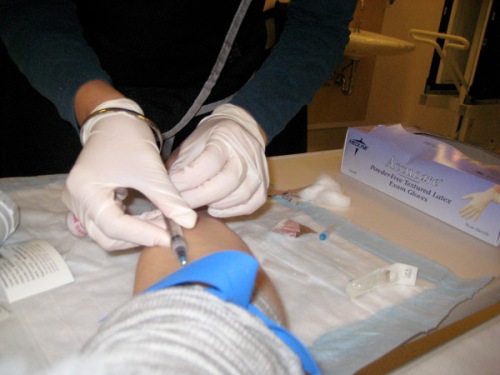 Then I waited… and waited… and waited. Waiting, pretty much an apt description of getting bone scans done. Because you’re injected with such a small amount of the radioactive tracer, and because it’s got to travel all the way down to the feet, you’ve got to give it sufficient time. The injection was at 9 a.m. and the scans didn’t start until 2:40 p.m.. In between, there was a whole lot of water drinking (to flush out the kidneys) and tea drinking (because, well, I love tea) and studying (same thing for 2011, except this time it’s for college chemistry and last time it was high school chemistry).

The scan itself was only about 20 minutes!

From 2016: The masking tape chronicles

The fellow doing my scan was great. As soon as he saw my insulin pump, he started telling me about how all four of his sisters have type-2, and his brother-in-law in Finland has type-1 and takes daily pen injections. We talked about Canada’s medical system (which by no means is as free as many in our country and others believe it to be) vs. Finland’s. This came as a shocker to me given how great the country is with its educational system, but apparently in Finland, the cost of diabetes is based on a weigh scale; those overweight pay way more than those not. This man’s brother-in-law pays in the thousands (Canadian equivalent) every week!!!

“He likes his sweets,” the tech said.

He took three photos of both feet (to compare the two): one of the top of the foot, one of the bottom, and one of the side. The photos took five minutes each and you had to stay still for the full five minutes. I was good for the first two photos; I think because we were talking so much it took my mind off it (plus, for one of the photos, my feet were taped with masking tape). But the last photo, I don’t know. You know when you’re told to stay still, but try as you might, all your body wants to do is move. That’s how I was! The last two minutes of that last photo, I could feel my feet and knees starting to twitch, and I kept thinking no, no, no, be good, be perfect, follow the instructions, don’t you dare move, dammit, stop, stop, stop. I tried taking my mind off what was going on by looking at the skeleton feet forming on the screens and trying to figure out which ones belonged to which foot, and wondering if that glowing line was normal foot bones or Princess problems. When the musical ding finally rang, I nearly shouted Hallelujah!

Apparently my doc will have the results in a week’s time.

Hopefully there will be some answers, something that will get the recovery process on the right track. Because seriously, I just want to bloody fricken well run!

One response to “Smurfette Part 2: The Bone Scan”