Pizza, worse than a tequila hangover

Pizza, it is the bane of existence for diabetics the world over.

The taste, a garlic-infused crispy crust, savoury tomatoes and fungi, oozing mozzarella, and the spice of the carefully placed basil tantalizing your taste buds. So savoury. So delectable. A treat that calls out in your dreams, lures you in your wake. But a treat, nonetheless, that makes you look at diabetes in the same manner as organic chemistry.

More fear calculating this than prepping for a statistics final!

I have had this disease for 29 years, and I have yet to master the skill of calculating the bolus’ and basals for pizza. I can eat baked cheesecake, no problem; cheese oozing quesadillas, no problem; but pizza, it has foiled me nearly every time I partake.

Big Ring is a master of the pizza-making skill. Ever since we visited Italy seven years ago, he’s been perfecting the art of Neapolitan-style pizzas.

Food art at its finest!

But for years, I’ve been shaking my head more times than not when pizza is suggested for the menu. Irregardless of my love, those middle of the night highs, that inevitably occur following said pizza, overrule the love.

A pizza hangover is worse than a tequila hangover.

It’s not the flour, the farina flour we use is a specialty pizza flour molded into a paper thin crust that I can pretty effectively calculate the bolus for. It’s not the tomatoes or the tomato sauce, even though they are sugar behemoths, they too can be accurately calculated for. Nope, it’s the cheese.

That cheese, the star of the show in some respects, kills us.

You can’t give a huge amount of insulin right off the hop, just before that first bite, because you’ll no doubt suffer lows shortly after. And when you feel that low, you’ll think, oh freaking crud, I gave myself way too much insulin. Nope, no you didn’t.

You see, that cheese, she’s an underhanded deviant. She’s laughing, watching the clock, counting down the hours until she can strike.

Cheese is full of fat. Fat slows digestion. So, an hour or two after you eat your pizza, your body still hasn’t properly digested it, but the insulin you took is shooting so fast through your bloodstream, you’re grabbing every last bit of sugar in your house to bring your blood glucose back up again. And then, midnight, 2 a.m., 3 a.m. hit and BAM! Cheese strikes. Your BG shoots up and you spend all night and well into the next day trying to bring her down again.

Feeling pukey, lethargic, all around gross the entire time.

I’ve tried a big dose up front; I’ve tried doing an assortment of combo boluses; I’ve consulted with the diabetic community, but to little success. And on the rare occasions I do get that A+ in the pizza-diabetes equation, I think, fantastic, I’ve got this – only to do the same thing the next pizza adventure and miserably fail.

Our bodies are not static, our diabetes is ever changing, what worked one day may not work the next.

But I am no quitter my friends…

The winter farmers’ market (which, by the way I’ve been writing regularly for since last January and can be found here: http://www.tenthtothefraser.ca/category/eats-and-drinks/) started back up again last weekend. Among other things, we came home with a bag full of market-fresh arugula, and market-fresh pine mushrooms (hand picked by a local forager!!!), we had mozzarella and prosciutto in the fridge, garlic and tomato sauce in the cupboard, and it was a crazy crummy day outside – the perfect recipe for barbecued pizza!

It was time I stomped that Cheesy Deviant to the ground! 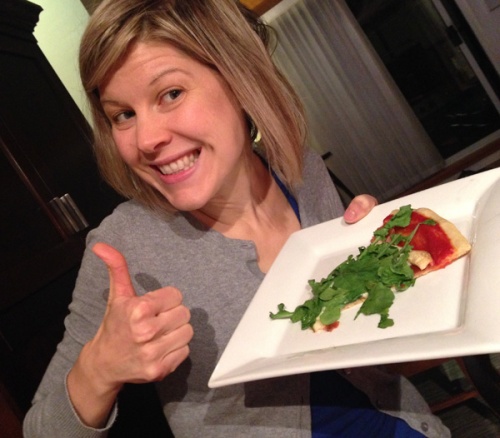 You will not win this time cheese!

But alas, she had other plans.

My blood sugar before first bite was 7.9 mmol. I tried the advice of a friend and liberally bolused 75% right off the hop, with the remaining 25% slowly seeping into my blood stream over the next half hour. I thought for sure my blood sugars would go low, and I’d be seeing a later high. Nope. They went high.

Needless to say it was a major pizza fail. Next time, I will try for a larger dose up front and a longer combo basal over several hours instead of a half hour and see if that works.

I’m interested to hear, how do all my diabetic readers deal with pizza?

This entry was posted in Diabetes, Uncategorized and tagged pizza. Bookmark the permalink.