No one said the robins’ egg blue road would be an easy road. I knew there would be hills, massive hills; I knew I’d likely feel that familiar nausea at some point in my lungs; and  I knew I’d probably face the inner turmoil of whether or not to continue to run or cave in to an early walk break.

But I was NOT prepared for a run akin to trying to run through Metrotown – BC’s largest shopping mall, featuring the most ignorant shoppers who walk at a snail’s pace 5, 8, and 10 across blocking any which way around them or through them. 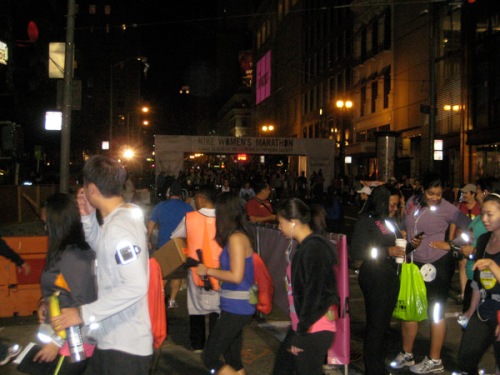 Me and my running chicks.

Can you imagine how difficult it was to try and race through that? (And yes, I did try!) My finish time was a walloping 23 minutes SLOWER than my fastest half marathon just five months ago, and I had close to an extra kilometre on my Garmin from all the weaving! Every split I had, was significantly slower than it should have been. My first 5 km was 5 minutes slower and my first 10 km was almost 10 minutes slower. Not cool.

I tried going fast, I really, really did, but there was no getting around these people. Most of them were Team in Training walkers (it was like running through a sea of purple) and so I tried not to get annoyed or frustrated with them in the beginning, I mean they were out there for a great cause and all, but after awhile, it was just bloody ridiculous. My body may or may not have squeezed through their ranks a few times.

One of the walkers actually yelled at us runners not to weave around them as we were climbing up one of the hills alongside a cliff that was quite narrow near the top. She said it was dangerous … apparently them coming to a dead stop to snap a picture of the Golden Gate with runners coming up behind them wasn’t dangerous at all though.

Speaking of hills, there were a lot! I tried counting, but lost count after like the sixth hill. There were big hills, long, winding hills, short, rolling hills, never-ending hills, hills, hills. At first I was doing great, running the entire length of them despite the walkers in front trying to circumvent my efforts. But by the time I reached the big hill at 14.5 km, I was feeling the evil nausea in my lungs and had started to hear the devil on my shoulder telling me to walk. I made it halfway up that hill, before caving in.

Even with the uncouth walkers and the disappointingly slow finish time however, this race had a factor in it, beyond Tiffany, that I know will have me going back for more. Its beauty. This was honestly the most beautiful race I have ever participated in. The scenery, from start to finish, was oh my god, jaw gaping  and oohs and ahhs escaping between the wheezing gasps of breath – especially at the top of those hills. We had optimal views of Alcatraz and the Golden Gate Bridge, and on one of the long descents, we were coming down around a corner and all of a sudden you were high above the beach with waves crashing below and the Golden Gate off in the distance. Beautiful.

The Golden Gate was featured quite prominently along the run.

When I saw the windmill in Golden Gate Park with just about 1 km left to go, the motivation fired up in my belly and despite the pukey feeling in my throat, I pushed hard, and by golly I finished that race with a glowing smile on my face … could have had something to do with the tuxedoed fireman handing me that coveted blue box 😀

Next time, rather than race it, I’m running the half, and documenting the beauty around me, NOT racing it.

The necklace has the line ‘I run to be…’ What word would you insert after the ellipsis?