The other night I was lying in bed and I couldn’t sleep. I tossed. I turned. I was tired, but my brain wouldn’t shut off. It took about 20 minutes of this before I decided to check my blood sugars. They were 3.4; I should have known.

For the most part our bodies are pretty good at telling us when things aren’t right, and for me, a surefire sign my blood sugars are low at night is when I battle with sleep. And yet, it’s almost always the last thing I check. As far back as my teenage years I’ve been fighting sleep the same way I did the other night. I’d stuff a pillow over my head. I’d get up to go to the washroom 5,000 times. I’d berate the sleep demons in my head. Anything but actually check my blood sugars. Nine times out of 10, they were always low.

This particular evening, however, while waiting for my BG to slowly creep back up, I got to thinking about some of the lows I’ve experienced in the last 26 years. There’s been some doozies. 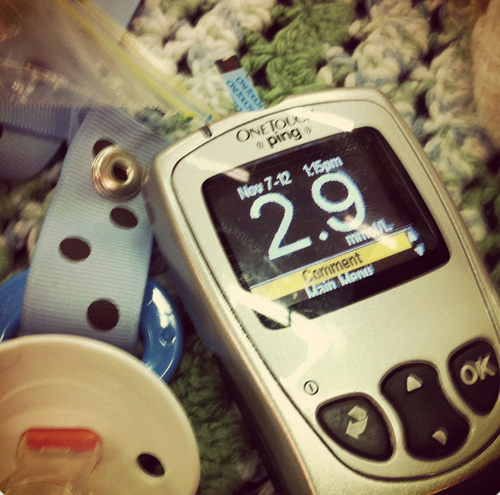 What? Did you actually think it would be an in-focus photo? Not when my hypoglycemic hands are shaking like crazy!!!

Probably the most amusing one occurred in my first year. My family and I were preparing for an evening out, for what I don’t recall, but I do remember being told to change into warmer clothes. And this is where my memory goes black… apparently I waltzed out of my room, jacket and boots on, announcing I was ready to go. The things was, all I had on was that jacket and those boots, nothing else – stark naked!!!

Fast forward a couple years and my family was no longer laughing with the onslaught of my first super scary low. I had been reading in the school library, when the first signs of a low appeared. Out of nowhere the words started bouncing all over the pages. I squeezed my eyes shut, I squinted, I concentrated real hard, but those words would not come to a standstill. I did nothing about it. I don’t remember the end of day bell, nor do I remember boarding the school bus home. But I do have flashbacks of dump trucks and semis whizzing by me on the busy farm road, and of me running back and forth across the street. The next thing I remember I was waking up in a stranger’s house with three men peering over me!

It turns out I boarded the wrong bus home and passed out in a ditch on one of the main farm commuter routes. A fellow who went to school with my sister, and who apparently enjoyed his recreational drugs a little much, spotted me and thought I was his dog run over! He took me to his house, called an ambulance and the school. When I opened my eyes and saw the faces of three male strangers over me, you better believe I jumped off that stretcher so fast and started screaming at the top of my lungs. (Moms, you would have been proud!)

To calm me down, one of the paramedics promised if I got back on the stretcher, he’d take me to my moms to which I agreed. But the thing is, the farm town I lived in, it’s a pretty small town, and I knew when the ambulance reached the 4-way stop, it had to turn left to go home, but it kept going straight. Wait a second. He told me he was taking me to my moms. My moms isn’t straight, she’s left. He lied. Anddddddd, I totally slugged the guy!!!

When I hit my extremely hormonal and experimental teenage years, there were too many to count middle-of-the-night convulsive lows, caught only by a mother’s intuition waking her up, feeling the need to check on her baby girl.

Years later, while working my first job in the newspaper industry, living in a community far from my friends and family, I also suffered several lows. Paid peanuts, I was forced to make a choice between whether I would buy food or test strips. There was one day when I knew the low was coming on fast, and so I took a swig of the honey bottle I kept stored in my desk drawer, before walking over to the nearby café for something more substantial. As I stood in line and waited, the girl behind the counter asked if I was okay. I shook my head. I walked to the drink cooler. Everything went black. And once again, the paramedics were rushing me to the ER.

Yep, doozies indeed. But none of those – NONE! – compare to the one I had just weeks after Little Ring was born. I didn’t go into convulsions. The paramedics weren’t called. I didn’t go to emergency. But I did have the worst fright of my life.

At the time, my body was still adjusting to its new state of no longer carrying a baby, and of continuously expressing energy and nutrients through breast milk. Little Ring wasn’t yet sleeping through the night and we were exhausted. There were a few nights where I propped the boy on my chest to ensure at least he got a couple hours shuteye.

One night, I woke up in a panic. Little Ring wasn’t on my chest. I whipped the blankets off, I threw my pillows, I pushed Big Ring. I couldn’t get my words out, my hands and eyes were frantically searching, my heart felt like it had a belt around it twisting it tighter and tighter. Big Ring tried calming me. There was no time to be calm. Tears shot out of my eyes. My head filled with the worst thoughts a mom could have. Had I smothered my boy? After what seemed an eternity, I finally looked over to the bassinet next to the bed and saw my sweet baby soundly sleeping.

Thankfully – knock on wood – I don’t experience much of those these days!

Anyone else want to share some of their low doozies?