Apparently furniture is to be given for the 29th anniversary, but for me, all I got was guilt.

My relationship with food.

The other day I was chatting with a pediatric dietitian who works with young diabetics at a local hospital, and so much of what she said to me resonated. We were talking about the different methods of treatment specifically with diet, post diagnosis. There’s the Nazi-like conventional method: no sweets, no treats, you best be perfect or you’ll die. And then there’s the flexible method: make it personal, make it healthy, do what works for your child and the family as a whole, no labels.

When I was diagnosed it was Nazi style only.

As this dietitian said so perfectly: It’s a perfect storm for an eating disorder. Unrealistic expectations are being put on a child who just yesterday could eat what they wanted, when they wanted, how they wanted, and now you’re telling them nope, you can’t eat that, you can’t do that, eat more, eat less, if you don’t listen, you’re doomed.

My first trip to the hospital courtesy of Dear Diabetes.

For over two decades my moms has been telling people I was malnourished Ethiopian child thin for the first four or five years of the disease, so thin the doctors kept adding to my diet, telling my parents I needed to eat more, they had me on a 2,700 calorie diet, and when I did start gaining weight, they didn’t take me off, so by the time I was 15, I was hiding my suddenly soft frame behind baggy clothes. 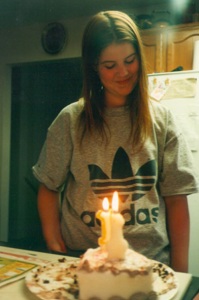 And sure, yeah, that happened. But what also happened is I became the child who would throw her “healthy” lunches in the bushes; I became the child who hid under her bed eating Halloween candy after Halloween candy; I became the child who would sneak spoonfuls of ice cream every chance I got, and one time hid under the table with the whole bucket thinking no one would see me there; I became the child who found bakers chocolate in the cupboard and ran to my room, crawled under my covers and took a nasty chomp. I didn’t learn from that. I hid in my room with a mixing bowl full of raw cookie dough; I ate Christmas chocolates in the bathroom; and something I am so not proud of and have never told anyone, but am now telling all of you, I used to snake my way into my parent’s room, on my stomach, in the early hours of the morning, when my moms was having a bath, getting ready for work, and would steal money from her purse – to buy chips and chocolate at the high school canteen.

Seriously, I am so sorry moms.

My relationship with food was not a good one.

They took a part of me away.

My only control was a full-throttle diabetes/me revolt.

Did I have an eating disorder?

Yes, I believe I did.

I didn’t starve myself, I didn’t regurgitate what I ate, but I binged. I struggled for years to get my eating under control, and ultimately to get my diabetes in control – on my terms. And even now, although I am now crazy healthy, and in complete control, I still struggle. I don’t gorge out on sweets and treats like I did years ago, but I question nearly everything I eat now as a result; I worry about the softening of my body; and sometimes I berate myself of indulgences. Not always, but it is there.

It doesn’t go away.

Dear Diabetes gets the thanks for that.

My relationship with food hasn’t always been a confident one.