Three months has passed since I last ran. It hasn’t been easy. It has been a frustrating as hell, are you freaking kidding me, I am far too bloody impatient for this kind of three months. A foot injury that first became apparent in late July, and was ultimately diagnosed as plantar fasciitis (oh how I had hoped it was not that) is the cause of my running absence, and as it stands currently, appears to be going nowhere anytime soon. In my state of denial, I kept running, not nearly as much as I was, but running nonetheless, which is likely the reasoning for my suuuuuper slow recovery. But would I go back and change it?

Not a chance in hell.

Dear readers, this blog post is so, so, so long overdue. A semester full of calculus and stats had my brain mushed in nonsensical numbers with barely time to breathe, let alone allowing my thoughts to fly high on hands down the greatest, most exhilarating, goosebump-inducing run I have ever been apart of. I hope I can now give it the due justice it deserves.

I did not want the run to end.

We got up real early the morning of October 5th, headed down to the Medtronic suite for a complimentary breakfast that had everything this runner needed – steel cut oats, sliced almonds, Greek yogurt, peanut butter, and bananas. I had a few jitters as I didn’t know how my foot would hold up. It had been at least two weeks since I’d run, but I’d had some promising results with physio; the pain was more a sporadic on again, off again dull ache; and my foot was taped up pretty good – I was hoping for the best. Eating and laughing with my fellow heroes took my mind off the jitters. 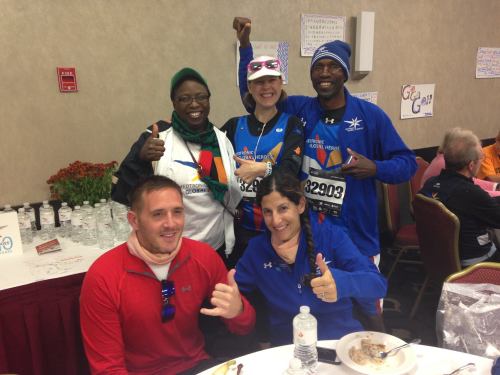 The endorphins started early with signs like these. Thanks Medtronic Canada!

The 10-mile group was the first to board the buses out to the start line in Minneapolis. I don’t remember exactly how early it was, but I remember it was dark as night, and I remember a bus full of us yawners. And the cold, my gawd, it was cold as heck. I had my 3/4 length tights on, which for me, October is way too early to be sporting those suckers, a technical undershirt, a technical, long sleeve, Global Heroes shirt, and my Global Heroes jersey, as well as my throw-away sweatshirt. (Note: I was told it was significantly warmer than years past where they’d seen snow and ice on race day, but whatever, I’m a West Coast weather wuss… brrrrr!) At the start line, my industrious hero buddy Miss Carmen, a native of Mississippi, but a long-time Floridian, discovered the drain circles were pushing up heat. And oh man, it was a glorious, warm, sauna-loving discovery… that is, until I started thinking about where that heat was coming from. Blech.

Boarding the bus: dark and cold.

We met up with a group of the other 10-mile Heroes in the starting corral. I had no idea if I was in the right corral, and frankly none of us cared (sorry hardcores). All I knew was that with my hero chickies and buddies laughing and snapping pictures next to me, I was happy as could be. Before long, my throwaway sweatshirt was nabbed by the Floridians and I was off. 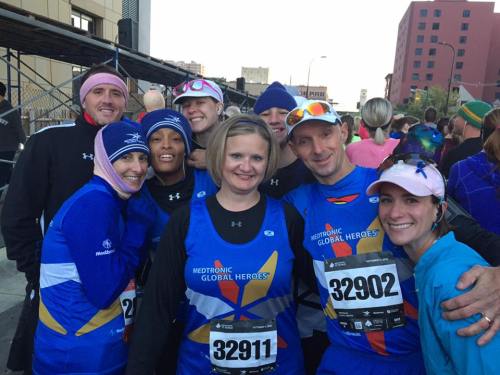 This race was the cherry on top of my rockstar weekend. Right from the start, I could hear people shouting out to me: Go Hero! You got this! Yah Hero! Way to go! Gloooobaaaal Heroeeeeeeees!  People on the sidelines, people running behind, some even in front, all cheering for me – me! Sure, I’ve had cheerleaders before, fantastic cheerleaders, cheerleaders who still bring warm fuzzies to my heart every time I think of them long after those races ended. But this time was different. These cheerleaders, they didn’t know me, I had never met them, had never spoken a word to them. Yet, with my Global Heroes’ attire, they believed in my greatness, they championed my greatness, they filled me with endorphins I don’t believe I have ever felt before.

It didn’t take long for me to start doing the same. Every alumni hero jersey I saw, every Team Medtronic jersey, and every fellow Hero I spotted, I too was extending loud cheers of my own. And for every sign and every cheer waved my way, I tried as best I could, through my huffs and puffs, to let them know my appreciation of their efforts, even if only with a goofy grin and a thumbs up. I had an honest smile glued to my face from start to finish. The foot was not even an irritation. 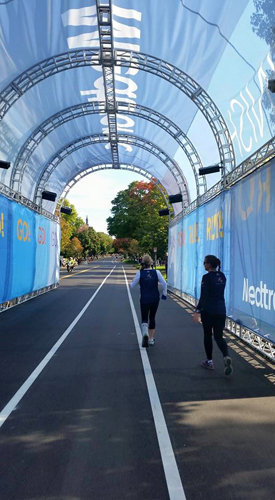 The Medtronic Tunnel – it stunk like hard-earned sweat! (Photo courtesy of Hero Debbie)

About half way in, I started keeping an eye out for my New York favourite’s alma mater that I knew I’d be passing by. Macalaster, a college that schooled Kofi Anan AND the wondrous Lil Veggie Patch, a college that was nestled between the beauty of the October orange leaves, and on the same street that had illusive Jesse ‘The Body’ Ventura stories forever stained. As soon as I saw it, my mind exited the running state and entered the Land of Make Believe; I was sitting in a café, eating pain au chocolat, drinking a cup of Earl Grey, with Miss Katie directly across from me. One day…

Seeing as how I couldn’t bring my homemade matcha apple sauce for fuel due to the whole border thing, I risked a NEW fuel source I nabbed at the packet pickup the night before – Clif savoury gels. Shockingly, the pizza flavour wasn’t half bad AND it didn’t mess my belly up!

I have run my fair share of races: two marathons, nine or 10 half marathons, and several 5, 10 and 15 km races. And pretty much, every single one of them there has been a moment of near debilitating fatigue. Sometimes it’s just a blip, gone in a second, sometimes it’s lasted for a good portion of the run (hello Marathon #2). But for this run, that never came to be. I don’t know if it was because I was running in miles, not kilometers (10 miles seems way less than 16 km) or if it was because of those crazy, awesome endorphins pulsating through me, but instead of wanting the race to be over, I didn’t want it to end. I clearly remember thoughts of slowing down, or even outright stopping, maybe doing a sit-in on the course so as to extend the joy a little longer. Seriously, it was like watching Little Ring growing – it was going too fast. And with 3 to 5 km left to run, I was desperate, I didn’t want it to be over, I didn’t want to cross the St. Pauls’ finish line, not yet,  I needed more. I didn’t want to go back to being a nobody runner on just another course. Selfish maybe, but those were my thoughts. 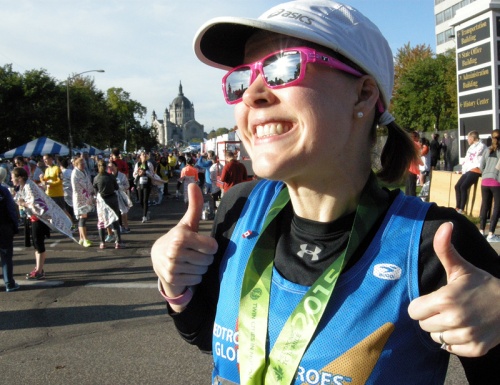 That smile was the smile of the race!

Now what? That is a question I have been facing since I boarded the plane. That weekend was so incredibly inspiring, the people I met, the stories I heard, the run I had. I couldn’t just go back to being the same me. I have plans, I have desires, I have things needing to be done, and I have a fire within me to get them done. All still currently in the early, thought-planning stages, but once finalized, they will be shared. I promise you this will not be the last you see of my heroism. 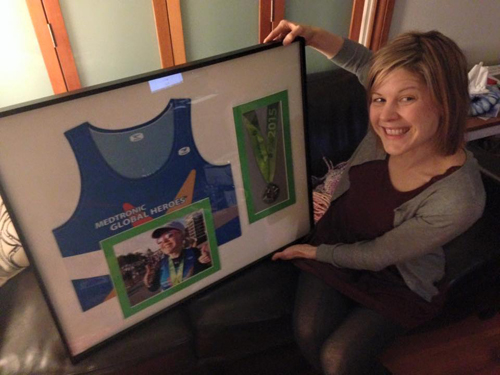 And the culmination of it all was wrapped up with a bow at Christmas time from Big Ring. Heart.