Happy Cinco de Mayo everyone – also known as one month ’til my birthday day! Just saying that makes me smile; I love birthdays. It doesn’t matter how old I get, or how many shocking greys I’ve spotted in the last few months (yes, I’ve spotted a few), or how many permanent smile lines form around my eyes, it’s my birthday – I’ve always loved my birthday! And almost as much, I love the countdown to my birthday, which was started this afternoon in a most glorious way. When I opened up my Betty Boop lunchbox,  I found a surprise note from Mario inside telling me to have a super amazing day. Well, now, that helped 😀 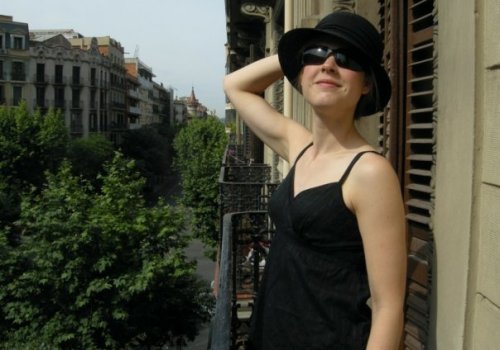 Last year my birthday was spent in Barcelona!

So I’ve started reading a book about diabetes, Cheating Destiny by James S. Hirsch, that was loaned to me by Rosedale Annie, whose teenaged daughter was recently diagnosed with Type 1. I’m only on the fourth chapter, but my gawd, I just got to say, thank heavens I did not grow up in the time before insulin! I can’t believe what diabetics had to go through. Essentially, they were starved to stay alive; they were like the little Ethiopian kids with the distended bellies that you see on the World Vision infomercials. And the starvation only worked for so long, usually only adding three more years max to their lives. Can you even imagine? I can’t. I love food far too much!

I don’t usually read books, fiction or non-fiction, about diabetes as I don’t like to be scared about the disease. It all started when I was about 12, and watched Steel Magnolias, a movie with Julia Roberts as a neglectful diabetic. I watched about half of it before going to hide in another room with my hands over my ears to ensure I wouldn’t hear any more of the awfulness that was to befall her. I still can’t watch it. Ever since getting diabetes I’ve heard stories of diabetics going blind, or of their feet going gangrene and being amputated, or of them passing out in the shower and drowning because no one was home to help them. I don’t know why people tell me these stories, but they do. And it doesn’t matter how good of control you’re in, if you hear these stories for 23 years straight, they’re bound to grate on your bravery.

But when Rosedale Annie recommended it, I figured I’d give it a chance. And yes, despite her telling me there wouldn’t be any scary bits, there have been some parts that have freaked me out, like the factoid about apparently being more susceptible to Alzheimer’s (have I mentioned I’m a bit of a hypochondriac?). There’s also been bits that have shocked me, like how doctors would taste a person’s urine for sweetness, before blood-testing came along, to diagnose them with diabetes (bet today’s doctors are thankful they weren’t physicians back then … ewww!). But mostly, it’s kind of been eerie. The author is a diabetic and is also a parent of a young diabetic, and reading some of his personal stories is like reading a tripped-out version of my own life. Case in point: When Hirsch’s three-year-old kid was first diagnosed, he was so dehydrated that the nurse couldn’t find a vein for the IV, but she kept jabbing and twisting and shifting the needle, trying for veins in both the crooks of his arms and in his little hands – with no such luck. When I was about 10, and also severely dehydrated (I think it was when I had jaundice )– same thing. There were two nurses and a doctor trying to get the IVs (yes, there were two) in my arms with my dad holding me down and my mom trying to calm me, with sorrow filling her eyes, as I writhed and screamed in the same way that I imagine Hirsch’s kid writhed and screamed. Eerie!