Unlike most of my Sunday runs, yesterday’s was a solo outing, which I guess could be considered a good thing if you look at it as preparation for race day where none of my favourite running chicks will be. But yesterday, still five weeks away from race day, my running chicks were sorely missed. Probably most noticeably in my pacing.

Because one of my running chicks was in Disneyland racing in her 9th half of the year (did I mention she’s crazy?) and the other was just outside of Spokane, visiting one of my all-time favourite running chicks who moved back there a couple of weeks ago, I decided that yesterday’s run would be one of the rare occasions where I would hit up Vancouver (eliminating the 45-minute drive to Abbotsford in exchange for a 30-minute Skytrain ride to  downtown … sorry gals, but I much prefer that commute) and meet up with Mario for lunch at Granville Island afterwards.

Mario's grilled ham and cheese sandwiches are by far my most favourite sandwich of all, but this Granville Island masterpiece comes in at a close second!

But when you don’t really have anyone accountable to for a long run (23 km) it’s really hard to get your butt out the door. I was coming up with every excuse: I had a headache. My leg was tight. I was tired. And as such, I didn’t get started until just after 10 a.m.

But when I did, good golly I don’t know what the heck got into my legs. My Garmin was showing speeds of 5:50, 6:00, 6:10, 6:20, 6:30 – not 6:45 to 7:00 minutes per km where it should have been. And I thought okay, it’ll peter out, I couldn’t possibly keep going like that for the full 23 km. But nope, right up until the last km, I was clocking speeds like that. And I kept thinking, oh crud, do I physically need my favourite running chicks around me to keep me disciplined? What the heck am I going to do on race day? Or, oh crud, if I keep running these speeds, I’m gonna be paying for it tomorrow, or worse, before I even finish the darn run. Thank goodness for walk breaks though; it all balanced out in the end with an average pace of 6:51.

A little post-run chocolate milk recovery goodness (such a good husband I have for bringing it to me :D)

Followed up by a little Seawall stretching. 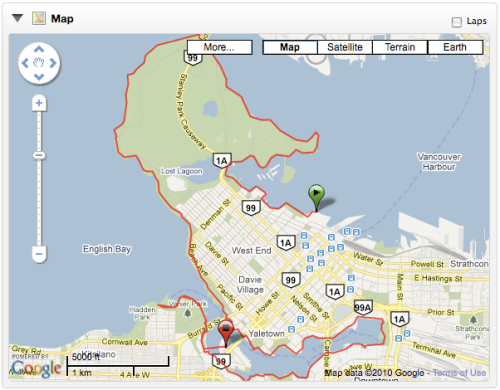 Generally when I run the Seawall, I try to steer clear of the washrooms. First of all, for the longest time, I never realized there was a washroom pretty much every 5 km, whether it be a public loo or a port-a-potty. But even when I did discover this, I still tried to stay away, because really, you never know what you’ll find in those washrooms – seriously, when it comes to public washrooms in Vancouver, people forget how to use them. Yesterday, however, my bladder was not working in my favour, and seeing as how I’ve already peed in cornfields, how bad could the Seawall’s public washrooms really be?

At 5 km, I walked into the washroom directly across from the kid’s water park. I was a little worried that I’d find someone’s business in the bowl, or droplets of pee soiling the toilet seat, or a full-on wet seat that I’d have to figure out a way of dodging, but surprisingly, I found no such thing. In fact, the stalls were shockingly clean. What I did find, however, was a bike leaning up against the wall. It wasn’t a real fancy bike; didn’t even warrant more than a half second glance. I just kept walking down the strip of stalls, looking in each one to figure out which would be my stall of choice (it’s a delicate process figuring out which stall to use) And when I hit the third stall, with the door wide open, I peeked inside, just as I had with the previous two, and low-and-behold, there was a woman sitting there, shorts to her ankles, doing her business – with the door wide open! Are you kidding me? I mean, beyond disturbing, did she really think that if someone were to in fact run off with her bike, she was gonna be able to stop herself mid-pee (or the other) and run after them with her shorts down to her ankles? Now that would have been a messy disaster! And what was I to say? Oh, ahem, sorry? Nuh-uh. I was so not in the wrong here, so I just jerked my head to the side and kept walking, thinking what the hell is wrong with people?

Beyond the washroom incident, it ended up being a pretty great run with perfect weather and perfect post-run company 😀 Although, I did walk away from it with a few war wounds (WARNING: super duper ugly toe photo below): 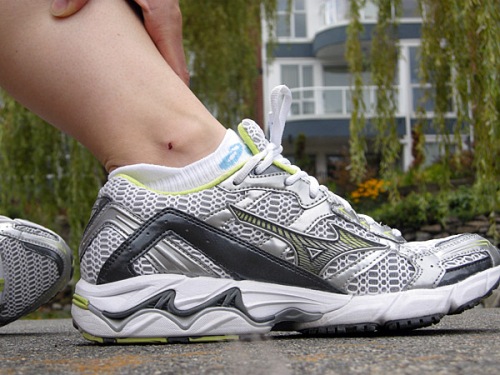 NOTE TO SELF(1): Kick the pavement, not the ankles! 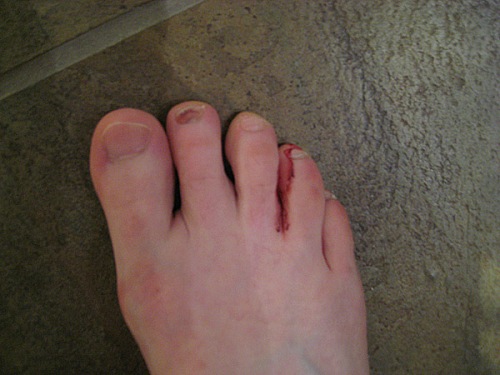 NOTE TO SELF(2): Listen to your gut when it tells you maybe it's time to cut those toenails!