Well, it was bound to happen I suppose; I have been running for more than four years without a single case of road rash’itis’ – until today. At 20.67 km, the brick road attacked me, I kid you not, out of nowhere it lifted up just like how they did in that super-lame ‘2012’ John Cusack movie!

I was focused. I wasn’t checking out my form (or my legs) in windows. I wasn’t daydreaming. My blood sugars weren’t low. The road attacked me! It wasn’t too bad though, I picked myself up right away and kept running. And beyond a few curse words and about 30 seconds of throbbing pain, it was nothing. 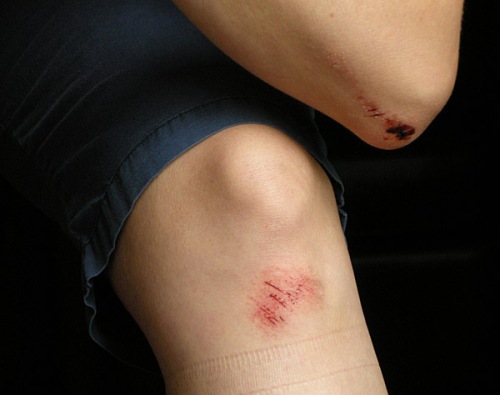 You should have seen the other chick 😉

Beyond the road rash, though, today’s run was by far my best run yet – I felt awesome! 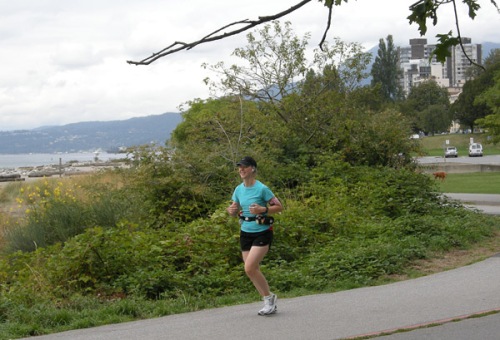 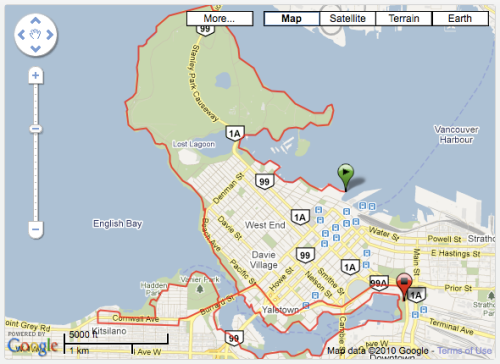 Mario and I had planned to head out around 9 a.m. (he was going to pick up his race package for the Gran Fondo at the Convention Centre and I was gonna start my run at the waterfront just past the Convention Centre) but the Skytrain broke. So I didn’t end up starting my run until 11:30, which was way late, but on the upside, I had plenty of time to digest my breakfast – no upset belly for me!

Getting ready to go.

I love running the Seawall (well, once I can get past the bombardment of tourists and people who walk five by each … but on a Friday afternoon, that’s pretty much non-existent) because it’s like running a different route every time. While the path is always familiar, there’s not one time where I haven’t seen or experienced something new (and that’s saying a lot, given that this run used to be my run of choice, back when I was a regular solo runner) like the seagulls preying on the starfish, or the red dots on the seagulls’ beaks, or the random tree growing out of this super tall rock and wondering how the heck that tree got there, or the factoring equation written in coloured chalk at the skate park, or the old man, who looked to be in his 70s or 80s, who gave me so much inspiration as I watched him running like there was no tomorrow.

Or the circle of red squatting buddhas:

Or the coolest house boat name I just happened to spot out of the corner of my eye:

Or a girl professing her love for some dude in a girl’s washroom … do you really think he’s gonna see it in here?

Or a dirty hippie:

Or a set of hounds that looked ever so familiar (do you remember Jules? Tanise? Ashley?):

Or the nicest public washroom I ever did pee in:

Or my dream townhouse … Mario, why don’t we live here?

Or my pit crew, the best pit crew EVER! 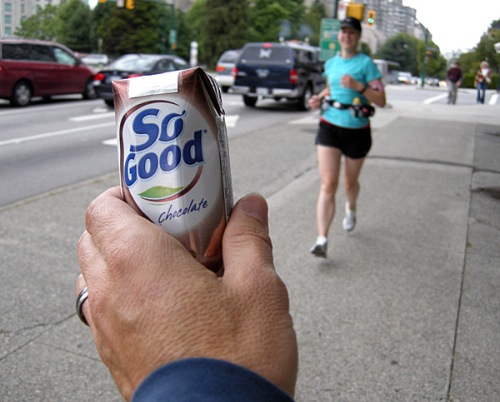 Instead of picking up his race package right away, Mario decided to meet me at different spots along the route (@13 km, @20 km, @26 km) and to supply me with water if needed, encouragement if needed, hugs if needed, photos, and yes chocolate milk too! I heart him 😀

After the last meet-up point, Mario headed over to the Convention Centre where he later texted me that he was in line with Trevor Linden, one of my all-time favourite, oh-so-hot, hockey players! So jealous.

Captain Canuck can be my captain any day (Sorry Mario)

We’re off to the Gran Fondo bright and early (like 5 a.m. early!) tomorrow where Mario will be decked out in Team Diabetes colours (they seriously need to get a better looking logo; this one kind of looks like someone puked on it!) and I will be “enthusiastically” handing out water at the Team Diabetes tent in Squamish!

What are your plans for the weekend? run? cycle? getaway? relaxation? Do tell!