Falling in love – with mornings 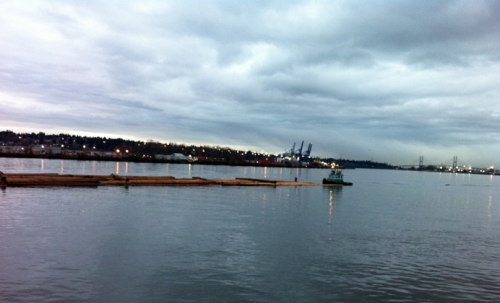 Because I had a late-night meeting to cover tonight, I decided to skip work this morning to take on a 6-8 km run first thing. However, my blood sugars almost got in the way. I woke up with a low, which rarely ever happens, usually only on the days when I want to go for a run first thing. It’s as though my body is saying screw you to me knowing I’m about to put it through the wringer.

And it’s hard to get out after a morning low … at least for me it is. Waking up with a low pretty much depletes all the motivation stores, and if you can fight through that, you’ve still got to figure out the math for how much insulin to give yourself for breakfast while at the same time battling the low. I didn’t want to drastically shoot my blood sugars up, but I also didn’t want them to drop while I was out on the run. Did I mention I don’t do math? (Mind you, I should probably start saying I begrudgingly do math as I’ve been doing an awful lot of it these days.)

So here’s what I did: I ate my Sunday morning  pre-run breakfast of raisin toast, peanut butter, 1/2 banana and 1/2 c. smoothie. I was initially going to have a 1/2 c. orange juice to push my BG up, but instead decided to use my smoothie and didn’t bolus for it. I also didn’t bolus for the banana, which I hoped would give me a nice little sugar cushion, and it should have as I seem to be real sensitive to the sugar content in bananas, but not so much this morning. (Although, I think I forgot to set my I:C ratio to 1:24g carbs, and instead used my usual breakfast I:C ratio of 1:20g carbs, which now makes sense why I didn’t get that cushion). The total bolus I gave myself was 2.00 units, which took into account a negative BG correction. Before I headed out the door, my blood sugars were 6.5. Normally I would have eaten a granola bar to boost them up more, but because I’d just eaten, and my blood sugars had already risen 3.5 mmol,  I figured they’d keep on rising. They didn’t.

For my diabetic peeps: How do you handle a low before a run?

Despite the low though, it was a great run. The whole morning before heading out the door, I fought my inner demon, it’s cold, it’s early, it’s dark, and when I got out there, my breakfast felt like it was bouncing around for the first 500 metres, but after that, it was great. The temperature was perfect, the lighting was perfect, my ankle was perfect. It’s crazy because as much as I fight the early morning runs (I’m really not a morning person) I think they always end up being my most favourite runs. I mean what better way is there to start a day?

When is your favourite time to run?