Screams and screeches and stomach-lurching what ifs

Forget Running for Water, we were running for our lives! 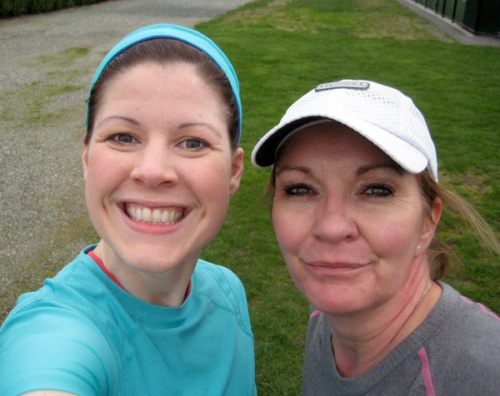 The girls were back together tonight, and my goodness was it ever a run to remember … but maybe not for the right reasons.

When I got up this morning, I had pretty much made up my mind about choosing a run over my first ever triclinic simply because I’m a runner first and foremost and I’ve been doing a heck of a lot of cross training these last few weeks; it was time I tapped back into my running roots. Then when I got a comment from my favourite running chick to let me know that she too was running a 10k and signed it off with my signature “just saying…” well, that just secured it right there.

Lori here, she’s my person, my running partner, but for months now we have been separated. I took time off after the marathon, then she was training for a half, then she got sick, then I got injured, etc., etc.. But tonight, nothing was getting in our way. I had my running partner back.

We didn’t really have a set plan for where we were going to run, we just figured we’d let our legs guide us. We headed out along Hope River and when we came out of the trail we opted to loop around through the city streets rather than do an out-and-back. And because we were to hang a right shortly after crossing onto this one street, we didn’t cross the street, and ended up running with the traffic instead of against. Big mistake.

So we’re running along, at a good pace too, talking about everything (we had a lot of catching up to do) when all of a sudden I couldn’t hear Lori anymore, the only sounds I heard were the screeching tires of a big white truck with a trailer attached coming at me from behind, I saw the truck, it fishtailed in the lane, then I heard the bang and the shatter of the glass. My shaking hands instantly grabbed at my face. I looked over at Lori, her hands were in the same place.

The truck smashed into a small Pontiac and just pretty much crunched it. The Pontiac then smashed into an SUV in the other lane. The girl in the Pontiac, in her late teens early 20s, jumped out blood on her hands and a broken lip, crying and swearing and shaking, and just totally traumatized. The older woman in the SUV got out of her vehicle complaining of chest tenderness. The guy in the truck got out and just kept apologizing over and over. And then there was me, trying to be rational, trying to calm the girl down, I even gave her my “emergency” TP to clean up her cuts with … and I didn’t tell her what it was for, but all the while I’m thinking holy crap, that was freaking close. Too close. 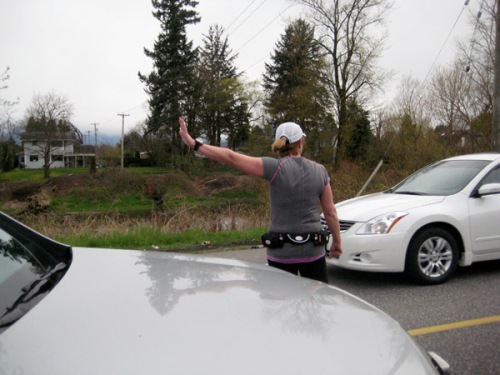 After about 30 or 40 minutes of waiting for the ambulance and Lori directing traffic (she’s a take charge kind of girl :D) we were back on the road. We decided to go back the way we came, get off the roads as quick as we could – I think our best pace was like 5:05!

The thought did cross our minds that maybe this was a sign we’re not meant to run together anymore, all these things getting in our way and all, but that thought vanished just as quick as it came. It’s not us. It’s Chilliwack. Never again … well, not until the next time at least 😉