Mad with the itch

Oh man, I came this close, THIS CLOSE, to chopping off my right middle finger. No joke, that finger almost did not survive the weekend. It didn’t matter how much I would miss that finger, and believe me I would (as would many others). Not only do I use it every day to type such important letters as K and I (both of which are in my name) but also rather frequently to extend my most loveable term of endearment to some of my favourite people 😉

But that finger, oh man it was driving me mad with the itch! It was so freaking itchy, like 50 spider bites itchy, a bush of stinging nettles itchy, crawling scabies itchy, cheap laundry detergent itchy, chop my bloody finger off now itchy. I tried to relieve the itch by rubbing it on my jeans, scraping it along the ridges of a pill bottle cap, dragging it back and forth on the carpet – none of which worked.

The cause of the itch, just another side effect of dear diabetes. 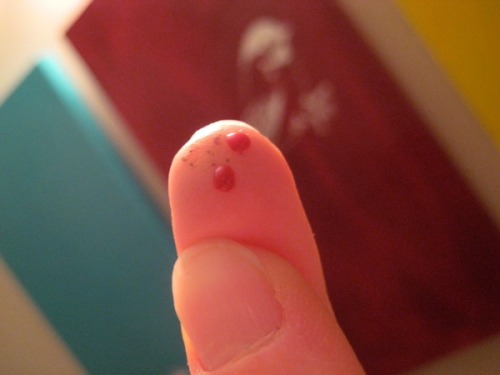 After more than 24 years of poking my finger with a lancet device, multiple times a day, sometimes as high as 12-14 times a day, my finger had had enough. Last week I started noticing that it wasn’t healing as quick as it should. In fact it still produced droplets of blood, with just a slight squeeze of the tip, hours after being poked. I kid you not, I was starting to resemble Bugs Bunny drinking after being riddled with ammo by Elmer Fudd’s rifle. A fountain display of blood, that’s what I was becoming.

It’s my own fault really. I mean, I’ve got 10 fingers to choose from, but really only ever use four. Early on, when all my fingers were still tender, baby skin smooth digits, I had decided that my two ring fingers and two middle fingers were to be my go-to fingers. My pointy fingers always bruise after being poked, my pinky fingers are far too petite to be poked, and my thumbs, while they’re good and fleshy, take forever to clot, seriously, it’s like the ebola of the thumbs after they get poked. No thank you.

And so now, my go-to fingers are riddled with decades worth of calluses, and for one day, the itch. Let me just say, that finger is so lucky it wasn’t itchy the next day, otherwise I may have been itchin’ for the butcher’s knife. Ahahahahahaa 😀

In my desire to regain some semblance of balance in my life, I chose to shut down my computer tonight, put the books away, put the work away, and sit with my husband and watch a movie. Movie viewing in our household is a favoured pastime, but as with many activities this last month or so, has also suffered. Tonight, that was to change.

The movie: Larry Crowne.
The review: Bad.
The lesson learned: Should I really be shutting down???