When I opened my eyes this morning there was lead weighting down my feet, sleep fairies blurring my vision, and every Negative Nelly excuse clouding my judgement. I had wanted to go for a run this morning, I was sure I did, and yet, when the alarm (aka: Big Ring) jolted me awake, I wanted nothing more than to roll over, stuff my head under my pillow, and go back to the land of dreams.

It’s too cold, I moaned. I’m not feeling so great, I whined. I’m tired, I whimpered. And then the negotiations: I’ll go when it’s warmer out. I’ll go when I’m more awake. I’ll go this afternoon. Translation: I won’t go.

Somehow, I don’t know how, I fought through it enough to get myself kitted up for a run, but even after squeezing into my compression tights (which by the way is NO easy task) I was still making excuses, right up to the point of lacing my shoes.

It was just one of those mornings. 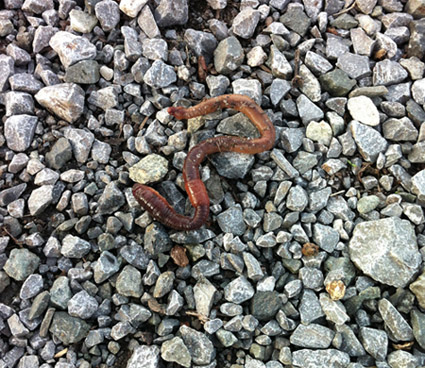 I was in almost as bad a state as this worm was with a robin pecking at it!

I don’t know what got me out the door – Big Ring’s encouragements? Little Ring’s smiles? An hour to myself with nothing but my own thoughts? – but I sure as heck am glad I did get out there. It was a freaking awesome feeling run that ended up being SIXTEEN minutes longer than it was supposed to be!!!

*NOTE: the post-run basal was a bit too high as I suffered a low later in the morning.

Today’s run was only supposed to be 50 minutes, and I would have done just that had I not – once again – been confused by direction. I’d love to say I’m directionally challenged, but I am so beyond that, I am directionally fugged up!

I ran out to Queensborough, a run I’ve done a few times in the past, but one I haven’t done fully in a couple years. I was pretty sure it was a route that would amount to 50 minutes give or take, but the thing is, when I got to the rail bridge, I started second guessing the route. (Why do I always do that???)  I wasn’t sure if the boardwalk would take me back homeward bound or if I’d have to turn around and come back the way I came. I thought I had done a loop in runs previous, but for the life of me I couldn’t remember exactly how I did that loop. So, after running 100 metres back, 100 metres forward, 100 metres back again (I was running just as indecisively as I was thinking) I finally decided I was better off turning around and going back the way I came – the way I knew I could get back home.

Point of no return: I’m lost.

And you know, you would think, given the way I had started the morning, I would have been cursing to beat all hell with my directionally disturbed ways, but I wasn’t, not at all. I was out there, ice wind in my face, early morning sun blasting through my eyes, and the shadow of my running self running next to me on the road, behind me on the boardwalk, and past me on the picket fences. I wasn’t fighting my breathing, my feet weren’t dragging, and my thoughts weren’t clouded. Quite the opposite. My legs were light, my eyes were bright, and my heart was happy as a kite.

I love watching my shadows run with me 😀

Sometimes, you’ve just got to fight through those demons, because hey, you might just be surprised with the awesome run that awaits you!