To fluff or not… 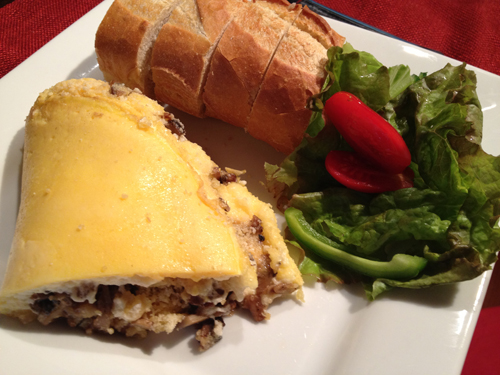 The day I moved away from my parents’ at 19 was the day omelets became a regular staple in my diet.

As you all know by now, I am not a good cook, and for the most part, when it comes to savoury dishes I do not enjoy the kitchen. For years I had no desire to learn dinner-style meals; my dinners pretty much consisted of omelets. Every night. You’d think I’d get sick of them after awhile, right, goodness knows my housemates got sick of the smell, but nope, I loved my omelets then, and I love my omelets now.

When Big Ring and I started dating, I quickly discovered that he, too, loved omelets… just not every night. Every week, to this day, they’re on our meal plan. And every trip to France we’ve made (3 for me, 4 for him) the first meal is ALWAYS an omelet and a side baguette.

My gawd, did it ever!

Given that Little Ring had been struggling with a Jack-in-the-Gums tooth all day, we decided to wait on our dinner until after he went to bed. The kid was tired, you could see he was tired, his eyes were droopy, he was expressing Tyrannosaurus Rex yawns, and melting down at the littlest of things. But do you think the boy would give in to Mr. Sandman? No.

Halfway through prepping the omelet – after whipping up the egg whites into firm yet semi soft peaks, and then combining them with the rest of the omelet concoction ready for the oven – I stepped away to assist Big Ring in calming our boy. By the time I had come back, the fluffiness had semi deflated 😦

I knew its looks were already far from perfection, but I hoped to still score high on taste in the end, which I am relieved to say I did. The balsamic vinegar was sheer brilliance. I’ve done omelets with caramelized green onions and mushrooms, but I had never thought to include balsamic vinegar. It kicked the flavour up ten-fold!

But still, I didn’t really see the point in the soufflé style omelet. For the most part, it tasted just like any other omelet I’d made prior, it was just somewhat fluffier. Why put that work in, when you could do the same for far less time?

Will I be doing this recipe again? Probably not. The balsamic vinegar concoction will be incorporated into future omelets, but the fluff I can go without.

1. Adjust oven rack to middle position and heat oven to 375 degrees. Whisk egg yolks, melted butter, and salt together in bowl. Place egg whites in bowl of stand mixer and sprinkle cream of tartar over surface. Fit stand mixer with whisk and whip egg whites on medium-low speed until foamy, 2 to 2½ minutes. Increase speed to medium-high and whip until stiff peaks just start to form, 2 to 3 minutes. Fold egg yolk mixture into egg whites until no white streaks remain.
2. Heat remaining 1 tablespoon butter in 12-inch ovensafe nonstick skillet over medium-high heat, swirling to coat bottom of pan. When butter foams, quickly add egg mixture, spreading into even layer with spatula. Remove pan from heat and gently sprinkle filling and Parmesan evenly over top of omelet. Transfer to oven and cook until center of omelet springs back when lightly pressed, 4½ minutes for slightly wet omelet and 5 minutes for dry omelet.
3. Run spatula around edges of omelet to loosen, shaking gently to release. Slide omelet onto cutting board and let stand for 30 seconds. Using spatula, fold omelet in half. Cut omelet in half crosswise and serve immediately.