Vancouver Eastside: a smile of a race

If my Vancouver Eastside 10k effort is any indication, I could very well be the perfect prototype for reverse psychology

For weeks leading up to this race I went through a range of emotions. I feared it, didn’t want to race it, didn’t think I’d do well. My training had suffered over the last month, I’d missed runs, or had had super crummy runs. And so, the week of, I decided I wouldn’t race it, I’d run it. No expectations. No pressure. (Or at least that’s what I kept telling myself!) Even when Coach NZ told me the day before that I’d “smash” the run, I despondently shook my head. Nah, I said, I don’t think so.

And then, the night before, with that dammed missed insulin issue, it almost solidified in my head, this was not going to be my race. I was sure I’d be spending the evening wrestling my blood sugars; not a good recipe for race-day speed. 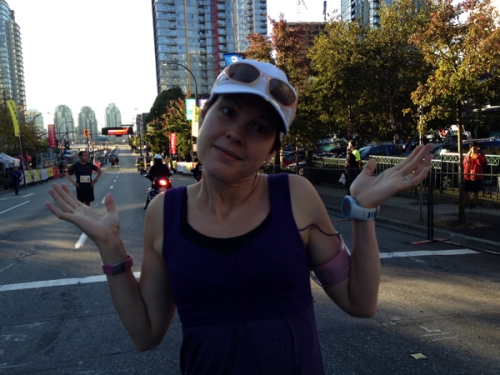 But wait, the blood sugars shockingly didn’t go all super crazy. Yes, they were high when I finally noticed the memory blip, and yes, they required not one, but two insulin corrections to bring them down prior to bed, but they didn’t bottom out. At 3 a.m. they were 4.9 and at 5 a.m. they were 5.6. There were no interventions required; I could work with those digits.

And wait, the run was set under almost perfect conditions. In its second year, there were, I think, 1,500 runners – not over-populated, and not yet over commercialized. The morning was bright and sunny, but still cool. It was a 10 km loop, but because we were running into the blinding sun for the first half, it didn’t feel like a loop. The route had us running through some of the more under-appreciated parts of the city. An area populated with lower income and homeless people, as well as the upper echelon, it was pretty incredible and heart filling to see that mix cheering us on. I’m still blown away by it.

When I crossed over the start line, I’m not going to lie, my head was still filled with bits of misery, questioning my abilities, questioning why I was there, but with all those positives surrounding me, there really was no way those thoughts and feelings could last. The energy of the people running with me, and those watching on the sidelines either purposely or by happenstance, was a drug.

I rarely looked at my watch. I took in the sights, the buildings, the people, the old Woodwards W circulating high above, the bricks, the cobblestones, my music. I was still not intending to race.

But, step by step, the racing engines started to fire. I didn’t stop at any of the water stations, I didn’t take it easy going up the hills, if someone passed me, I didn’t over-react and chase only to burn out seconds later, but rather kept a steady, fast-twitched pace, never forgetting their face. When I approached the finishing chute and saw the bright red emblazoned numbers of 5 followed by 3 on the timing clock, I charged. Coming in, I was the autobus of the group, finishing, I was close to the sprinter’s lead out.

Holy wowzers!!! That is the fastest – official – 10 km time I have ever managed. Given the strength my muscles had at the end, I probably could have gone faster, but the thing is, I pushed myself hard enough – for me. I achieved a personal best and by golly I was SMILING doing it!

I needed that race! 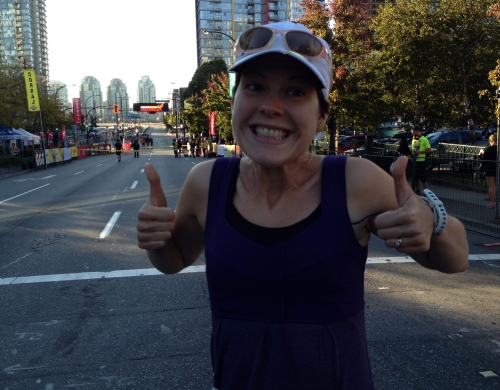 And I was NOT the only one racing…

2 responses to “Vancouver Eastside: a smile of a race”