For those of you keeping tabs, and thank you so much for doing so, the results of the run vs. sloth week are as follows:

While I know I am the only one who can truly get me out the door running, it helped HUGE knowing that I’d hear from a few of you if I didn’t. This week could easily have been a one or none kind of running week. There were excuses aplenty to be had: It’s New Year’s. It’s cold. I have no one to run with. I’m tired. It’s raining monsoons. But, your words of encouragement; your words of prodding; and for some of you, your commitment to get out there running with me, either alongside or from afar, meant a world of difference. Seriously, thank you. 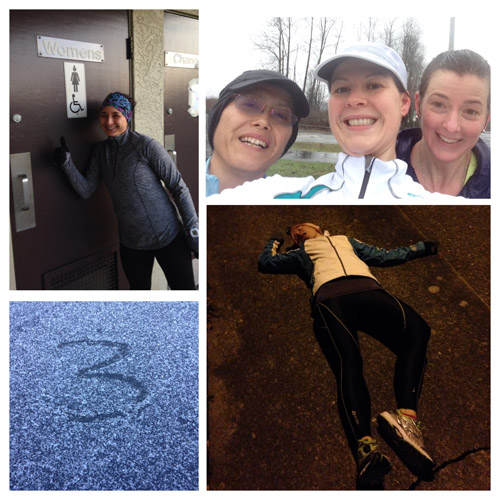 Four runs (clockwise): I have to pee!; splish splash; death by hills; SNOW… sort of.

Four in the pocket for the week is a fantastic way to end my three-week school holiday. Today is the first day of Semester 2!

This run was a roller coaster of highs and lows, and not only with my blood sugars. But hey, let’s start there.

I have no idea why my blood sugars were 11.7 at the start of the run. At breakfast, three hours earlier, they were 7.2; if they had been consistent with the past couple weeks, they should have been down to at least 6.0 or less by the start of the run. Dear Diabetes was most definitely having her way.

When this happened a few weeks ago, I didn’t take any fuel prior to the run for fear of the blood sugars rising to a sickening state, and I also didn’t cut down my continuous insulin. By 30 minutes into that run, my blood sugars had dropped to 4.8. I still had the same fears for this run, so I skipped the pre-run half banana, but this time I cut down my basal to I think 50 per cent, but possibly 30. Regardless, it wasn’t enough. At 30 minutes in, they had again bottomed out. With the run three weeks ago, I turned off my insulin at this point which resulted in post-run highs that lasted for hours after, which I didn’t want to experience again. So this time, I cut it down to 60 per cent (thinking that I had only cut it by 30 per cent earlier), which was so totally not enough.

Despite sipping on my homemade sports drink and noshing on a shot block, by 60 minutes in, my blood sugars were dangerously low. At that point, I stopped running, guzzled the remainder of my sports drink and stuffed 2 more shot blocks into my mouth. Thankfully, though, 5 minutes was all it took for my BG to rise and me to be back running again. 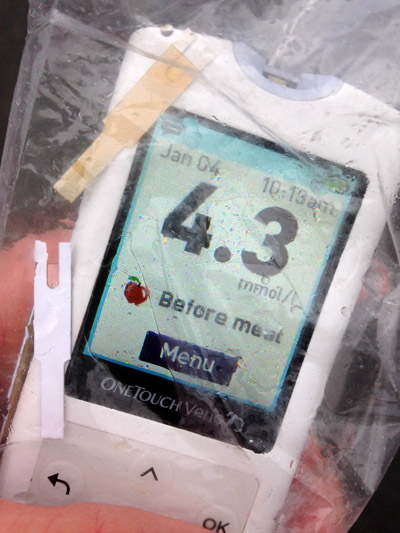 Stupid blood sugars. Before that, I was having a decent run. It was monsooning like hell. The trails were covered end-to-end in puddles. (There’s no dodging puddles on the West Coast!). And if you stopped you were met with bitter cold. Still, for the most part, I was keeping my pace in line for where it needed to be, and wasn’t feeling exhausted on the faster portions of the run. And even after the blood sugar drama, I was still able to kick the last five minutes or so in the teeth with a super speedy finish. 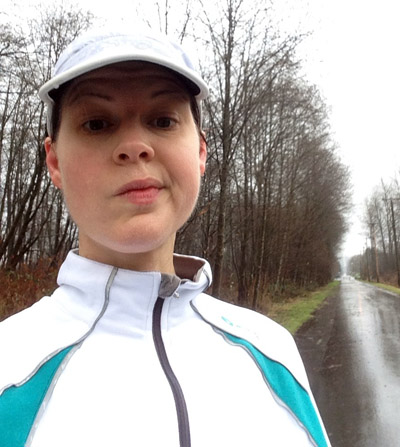 Not impressed with Dear Diabetes messing with a decent run.

This entry was posted in Diabetes, Running and tagged Dear Diabetes, hypoglycemia, running in the rain, running with low BG. Bookmark the permalink.