About 15 years ago I met a couple of gals, who I kid you not spent an entire summer trying to convince me that science was the coolest thing on the planet. I was a hard sell; after a lack lustre experience with it in high school, and an eye for the words, I never imagined science to be anything more than something I had to do. (Little did I know then that it would turn into my life journey.) Had those gals had the Medtronic Headquarters at their fingertips, they may have had a bit more success of shooting science love into my heart!

On day two of being a Global Hero, my new besties and I toured the Medtronic facility. Holy freaking hell!!! This place was like serious nerdville for us diabetics (and all the other technology enhanced peeps as well). We got to see medical devices in the making; check out the behind-the-scene intricacies of a study that is working to make infusion insertion less painful on us wee pin cushions; and talk to the very scientists whose brains are working every day at making our lives better to live. 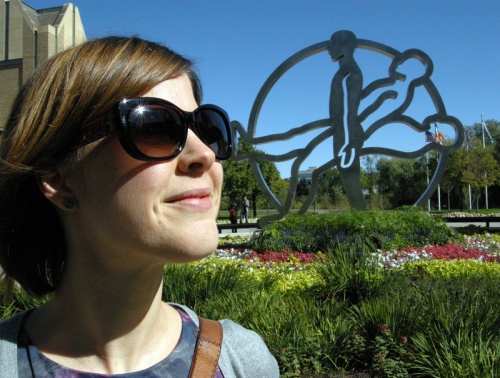 The Medtronic logo: sick to healthy.

And that’s where Tom comes in. This man, wow! I don’t think I will ever forget his voice; the light in his eyes; the passion in his words. For years, pretty much since I got the pump, I have been lamenting its size. It is the thickness of a ‘90s style pager, and the size of a deck of cards. That is TOO big. When I wear it on my belt, my shirts ride up all the time because of it. Tight-fitting jeans are a challenge because of it. And dresses, I look like a bloody hunchback when wearing a cardigan because, unless I want to sport the look of square boobs, it ain’t fitting in my bra! So naturally, my question to Tom was:

“Are they ever going to get smaller?”

Before I could speak another word, before I could tell him my issues, he looked me straight in the eyes and the words just shot out of his mouth faster than a cannonball, arms waving every which way. He fully admitted the technology wasn’t good enough. He wants it smaller, thinner – the thickness of an iPhone. You’re not satisfied, he said, I’m not satisfied!

Sure, I could have been sold a bill of goods, but if you’d seen those eyes, I think you’d agree, this man is going to do everything he can to get insulin pumps to the point where I will be satisfied, where the 100s of 1000s of other insulin pump users will be satisfied. I’m not gonna lie, I kinda, totally fell in love with this man! 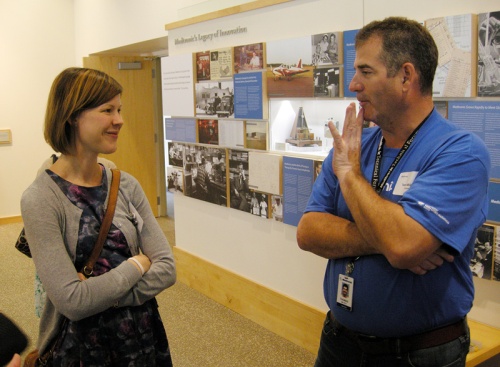 Walking through headquarters, Big Ring kept pontificating the benefits for the employees – they had to have had a fantastic onsite daycare; they must have a state-of-the-art gym; a basketball court likely… maybe even a napping room! Not only the passion of the employees, but the grounds – it was like a university campus in of itself. But me, I wasn’t thinking of any of that. As soon as I saw the electron microscopes in action (which I had only just discovered in my microbiology text the week prior) I was in serious lala land – coolest things EVER!!!

My girlfriends of 15 years ago would be so proud – Science!!!

Ahh, but the tour wasn’t all sunshine and rainbows. The moment I walked through those doors, I felt somewhat like a Scooby Doo intruder about to be unmasked. You see, I was wearing a super cute dress, and as mentioned the pump doesn’t hide well, at all, in dresses. Normally that’s not an issue; I’ve used this sucker as a fashion accessory for six years now. But the thing is, my pump, ahem, isn’t a Medtronic Pump!!!

Okay, so it’s not like it was a secret, Medtronic knew my pump wasn’t theirs. They don’t discriminate against other companies when selecting Global Heroes. But still, I was touring the Medtronic facility, I was meeting the Medtronic scientists and engineers, and would be a handshake distance from one of the top big wigs of the whole company! I could have at least disguised my pump as a Medtronic one. That is all.

Leaving Medtronic, my head was spinning with information and details and things I wanted to do, things I needed to do. But it was a precious little boy’s face who filled the majority of my brain capacity. Lightening Bolt, my four year old nephew who was diagnosed in June with type-1 – he is going to be the beneficiary of Tom’s, and all the other Medtronic employees, passion! Thank you.