The spinny world of a non map-savvy runner

Did I happen to mention how directionally challenged I am? North, east, south, west, what’s that? I could get lost in my own backyard. I’m not kidding, I actually did! But in my defense that was when we Iived on five acres and I was just a kid and … oh shoot, I’ve run out of excuses. I’ve been teased about it for as long as I can remember. I’ve made left turns when I was supposed to make rights, gone east when I was supposed to go west, gone towards the water when I was supposed to go towards the mountains. And let me just say, it can be frustrating – and dizzy – living in my spinny world. But with the advanced technology of GPS systems and Google Maps and Mapquest and Mapmyrun.com, I’ve thankfully been getting lost less and less frequently. 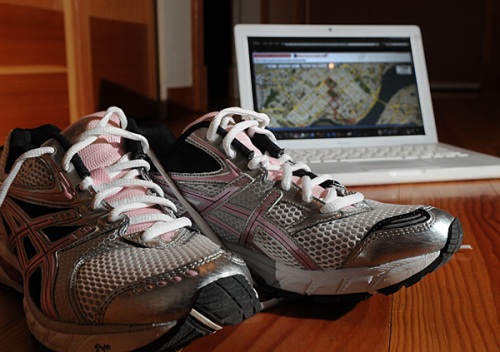 Until today, that is.

I’ve lived in New Westminster for a year now, and at one point even worked in the city, you’d figure I’d know my way around by now. Apparently not. Mario mapped me out a 7 km run that looked like this:

But somewhere along the way, I got mixed up, and you know what, I don’t think it’s all my fault. I blame New Westminster. You’ll see on that map that I had to navigate several numbered roads: 6th Ave., 6th St., 8th Ave., 8th St., 10th Ave. 10th St., etc., etc. How on earth is a girl – especially one with directional ineptitude – supposed to figure out if you’re supposed to be on a street or an avenue? Is it really so much to ask to give these streets proper names? Really?

I can’t actually provide a map of the route I ended up on, because I really have no clue where exactly I was running, but I will provide a look-see of one of the avenues I ended up on: 3rd Ave. Just as I turned right onto 3rd, my eyes went all Roger Rabbit. “You’ve got to be kidding me,” I blurted out. Steepest friggin’ road I have ever encountered in my life – there was no way I was running down that hill, I was bloody scared just to walk down it, fearing the great possibility of tumbling down it!

But I guess that’s the price you pay when you live in a city that’s basically a hill, and you live by the water, at the bottom of the hill!

I was feeling alright on the run, although going up the first hill I was pretty tuckered, but mustered along … slowly. I stopped at the track for about 15 minutes and did some butt kicks, high knee marching and high skips (liked the skipping :D) but I felt like a fool the whole time as I had to repeatedly pass the bleachers where a bunch of soccer guys were sitting and waiting for the soccer field to open up. Not really sure if I like the whole drill thing, but apparently it’s supposed to help my form, so I’m giving it a go. The run fell apart, though, as you can imagine, when I got lost … lots of walking, twisting my head back and forth, turning around, turning back around, and weaving through the underbelly of New Westminster. Oh joy!