So, you know how I said I was gonna treat Sunday’s race like a regular Sunday 10k easy run? Yeah, that didn’t happen. My competitive juices boiled over right from the get-go; I bolted out of the gate with a 5:15 pace! I tried slowing down, believe me I did. I kept telling myself to reign her in, race your race. But no matter how hard I tried, my pace just would not brake. And I felt great – I LOVE RACING! 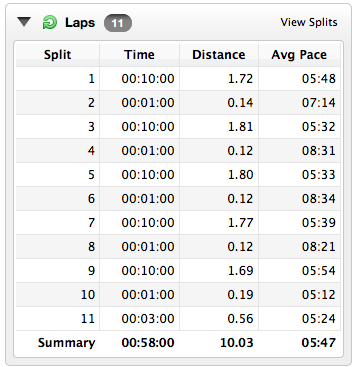 I think I’d actually forgotten the joys of racing. The last “official” race that I did was the Vancouver Sun Run two years ago. I’ve trained for three half marathons since then, but got injured for two, and held my own “unofficial” race in October along the busy Vancouver Seawall, but it’s just not the same as the real racing deal. I had butterflies fluttering all through my belly starting on Saturday night; I kept chanting over and over ‘You can do this. You’re going to be great. You’re going to kick that run’s butt.’; I tripled checked to make sure I had everything I needed before going to bed, and then got up one more time to quadruple check. The alarm went off at 5 a.m. (ouch!), I got dressed, ate breakfast, and we were out the door by 6 a.m.

The nerves hit me again as I was shivering at the start line, waiting for the gun to go off. I positioned myself about three quarters of the way back (at this point I was still thinking it was just going to be an easy 10k jaunt) and waited for the gun. 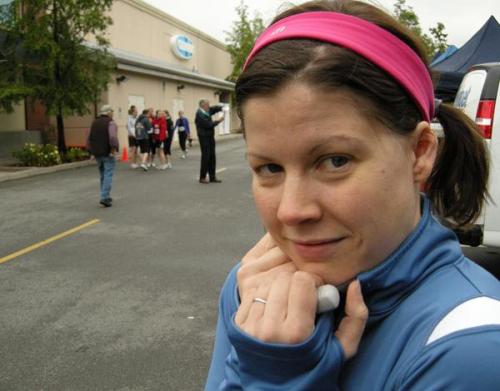 The starting point for the race was located in the mall of an affluent North Vancouver neighbourhood. We had to weave around the outskirts of the mall parking lot, before hitting Ambleside Park, along the water, which is where the crowds started to break apart.

The race started so darn early, I couldn't even keep my eyes open!

I looked at my Garmin. Holy Crap! I was doing a 5:15 – where the heck was that coming from? My Garmin started beeping at me, telling me that my first 10 minutes was up, it was time to walk a minute. So I started walking, but people were passing me, I couldn’t let them pass me, so after about 30 seconds I started running again, which caused me to instantly berate myself for not running my race. I am a firm believer that the 10:1 system is a kick-ass racing strategy, that leaves you with much-needed energy at the end of the race, and doesn’t really cut into your time at all. I promised myself to do better the next go around. And It didn’t take long for me to reel in an older fellow, who had passed me on the walk break, and was going at a nice clip – he became the mouse, while I was the cute little kitty, ready to pounce! Every walk break, he would surge ahead, but once I started running again, I always managed to catch up, and I even passed him a couple of times. By about the 8k marking, though, my energy was starting to wane. Oh crap. The loud, pounding feet of the guy behind me became irritating, the rabid swinging arms of the woman ahead of me was driving me insane, and the unleashed dogs jetting out in front of us racers was just flat out pissing me off. But then, at the side of the path, just a little ways ahead, a woman volunteer was jumping up and down, high fiving the racers, urging them on, shouting at them to keep going, “It’s for the kids!” she yelled.

My energy was back. I was in this race. I surged forward, I found my mouse, I passed my mouse! And with about 700 metres left to go, my shoulders dropped down, my abs clenched, and my legs sped up. You’re in the home stretch now baby! I could see Mario and his camera standing just past the finish line. I thought of pulling down my shirts, making them look all pretty like for the picture, I thought of showing off my pearly whites, I thought of correcting my form, but then, with another female runner just ahead me, my competitive juices kicked back in. Ahhh, screw it, I thought, speed was way more important! I beat her 😀

I so felt like I was gonna puke once I crossed that line!

And the best part of all, my foot didn’t give me any troubles at all, and it actually seems to be feeling a lot better today – maybe a good race is all it needed 😀 I can’t, however, say the same about the rest of my body. My calves and abs and shoulders are so tight, it hurts to laugh! A good race indeed!

What do you do to keep your energy strong throughout the whole race?