Why the laugh you ask, well, I’ll tell you. Some of you may recall how two months ago I was in the midst of a group of men picking hockey stars for our fantasy hockey playoff pool, which is named the ‘Real Man’s‘ hockey pool. Myself and one other gal were the only females in the mix. And while the guys and the other gal had their eyes glued to sheets of paper filled with “important” stats and predictions and comparisons and who knows what else they were looking at, me, I kept it simple – I drafted based on looks.

Duncan Keith and Patrick Kane: I had to lower my standards a bit as the 'real men' seemed to be attracted to the likes of Alexander Ovechkin (yum!) and Jonathan Toews (dreamy) too!

Ever since I joined the ‘Real Man’s’ hockey pool five years ago, I’ve been relentlessly razzed for my strategy. Some have rolled their eyes, some have shook their heads in disbelief, some have been outright vocal about their disdain for my strategy. One fellow poolster, a certain, highly regarded, sports reporter for the AP, who we’ll call The Bastards (named after a great song by The Replacements: Bastards of Young) even cackled quite gregariously at my Mike Richards and Jeff Carter late-round picks for this season’s pool, both of which hail from the Philadelphia Flyers – one of the remaining two teams in the final round of the playoffs. Who’s laughing now bucko? Mahahahahaaaa! … please don’t think I’m cruel, The Bastards left us a phone message at the end of the regular season gloating about his domination of the regular season pool, and in the first week of the playoff pool, we got another phone message from him cackling that he was now leading the playoff pool. Ohhhhh but how the mighty fall, hey 🙂

As I write this posting, Game 6 of the final round of the playoffs, between the Chicago Blackhawks and Philadelphia Flyers is in sudden-death overtime. If Chicago can win it, my team – Luongo’s Lovers – will have officially won the pool. But truthfully, I pretty much had it in the bag the second Chicago advanced to the final round. See, I have players on both Philadelphia AND Chicago. Kaching! 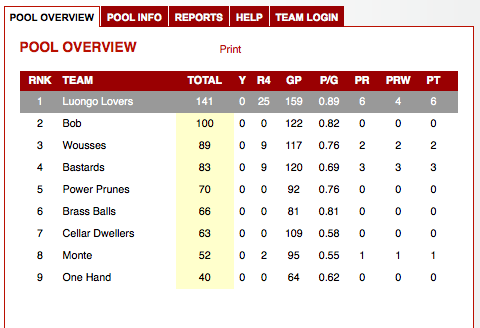 Look at that! I’m 41 points above the next team – and Team Bob was the only other gal of the pool! Real Man THAT!

This is the second time I’ve won the playoff pool (I repeat, haha!). The first time I bought a dress, this time, I bought me a new pair of $286 jeans!!! Thank you Patrick Kane. Thank you Duncan Keith. Thank you Mike Richards. But seriously, did we really have to go the mullet route???

TONIGHT’S ABS: (I’ve decided since I’m super weak in the ab department and can’t do too many at once, if I can manage a few each night, I’ll be golden!)