That being said, though, this morning’s run was a little, uhm, extended. An almost 7 km run that my Garmin clocked in at being 46 minutes, actually ended up taking me a whopping hour and a half! Given my directional ineptness (and the fact that I was totally grooving to Bootylicious) I may have gotten somewhat lost … AND … well … I may have also gone shopping halfway through! 😀

When I left the house this morning, I didn’t really have a set map, I just kind of figured I’d let my legs guide me. Instead of starting out on the boardwalk, which I’ve been doing a lot lately, I figured I’d change it up a bit and give the overpass another shot. But when I got over the overpass, instead of going straight up the hill, which is another usual route, I decided to follow the SkyTrain line (also known as the 7-11 trail) … at least, that’s what my intentions were. 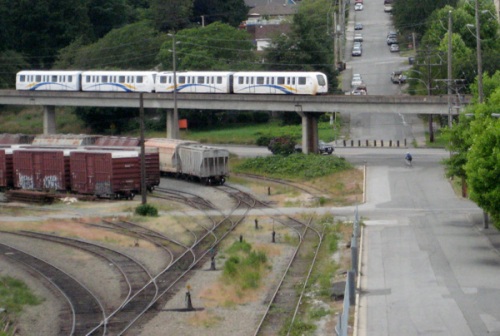 The 7-11 Trail follows the SkyTrain route between New Westminster and Vancouver's Clark Drive and is a total 40 km return ... I was only planning on doing 6 km.

But when the SkyTrain line curved up, I couldn’t figure out how to get across Stewardson Way, which is a major thoroughfare, and I thought well it’s got to hook up somehow, this is a designated path, and surely the designers couldn’t possibly have expected us runners/walkers/cyclists/others to navigate the vehicles that are going anywhere from 70 to 100 km/h could they?

Apparently they could. Nowhere could I find a way to get across (later on Mario informed me that there used to be a way across, but when the interchange got redone, they neglected the path, and voila no way to get across) and so instead my legs took me over the Queensborough Bridge. Oh crap. 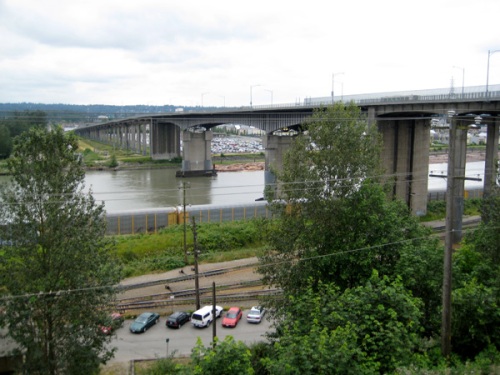 It's loud. It's busy. It's a kinda scary freaky bridge! ... my pace totally sped up while I was going over it, a sure sign I wanted to get off there as quick as possible!

But you know what they say, accidents can sometimes lead you to treasure. Hello outlet malls!

With shops like Calvin Klein, Mexx, Esprit and even Best Buy you can't really blame a girl for stopping now can you!

I needed some purple shampoo (apparently it’s supposed to be good for us blondies) so I stopped in at the Chatters and spent some time deciding between three different brands: Joico, AG, and L’Anza. I went for the one that fit best in my back pocket.

Once I had the shampoo, I had fully intended on getting back on the running road, but the Esprit shop pulled me in … it’s not my fault, nope, not at all. And there were so many cute little things in there, and lots on sale (love outlets!) but I couldn’t really justify sticking a nice new top in the back of my sweaty shirt pocket. So, I guess I have an excuse to go back, hey!

It was a pretty great run after the initial over-the-bridge fear. And the best part, it was almost a perfect 6 km and NOT so hilly, which is almost unheard of in New West! Yay!

Do you think it’s okay to stop halfway through a run, when you’re training for a certain distance, and then pick up the remaining kilometres like a half an hour to an hour later?