Lunges and butt kicks and quinoa, oh my

The other day a girlfriend of mine let me in on a lesson that was drilled into her at an early age from her dad. The four most important words in the English language, she told me, are: I know a guy.

Well folks, I know a gal!

Yesterday was supposed to be a mandatory rest day, and I had every intention to do just that, given that I had just brutalized my body running 29 km in 34 degree heat, and that I had spent the better portion of the morning walking around like a 90 year old who had just undergone a double hip replacement. But here’s the thing, an opportunity presented itself. An opportunity to learn, first hand, how to do a proper lunge. Something I figured I kind of needed to know in order to keep myself injury free on this Legs Love Lunges Challenge I’ve embarked upon.

So, you remember those four most important words: I know a gal? Well, do I ever! My girlfriend Hilary, who has the cutest Kiwi accent EVER, just happens to be one of the fastest triathlon chicks in the world! After winning triathlons, and coming in first in her age category for the New Zealand Ironman, she was selected to compete in the Long Distance Triathlon World Championships for Team New Zealand, which were held in Germany last month. And out of more than 400 other female competitors, my girl Hilary, she came in 18th!!! And she did all that, and continues to train now for the Kona Ironman, which is in Hawaii this fall, while planning her wedding, which is in January, in New Zealand! She is seriously amazing, like even more so than the Bionic Woman!

We had planned to meet for coffee after work (even though neither of us drink coffee) but then Hilary suggested we meet at the park so she could show me how to do a lunge.

Check out that perfect form ... minus the pole coming out of her head. My bad.

But we didn’t stop at lunges. Hilary had a few drills up her sleeve that she wanted me to try, which she said would build strength and help improve any deficiencies in my running form. And because I’m in no place to argue with the fastest chick EVER (at least in my world) I was in.

We did high knee running and butt kickers (which I really kind of enjoyed … it looked totally dorky, but was fun AND easy to master, which is always a bonus). And we did hands on our head running, which is supposed to cut down on useless, energy sucking bouncing, and super fast running on the stairs, as well as sideways running on the stairs (I can’t remember what those were good for, but she said I did good on the sideways one, so yay me!). And she also showed me how to do strides, but I kind of let her do those ones on her own 😉 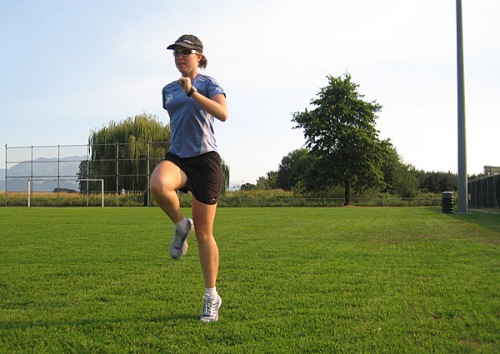 And the best part of all, she said it only takes like five minutes to do a few of the drills, after say a tempo run, once a week, to see improvements. Now that I can swallow!

After our drills, we headed over to the coffee shop, where she told me all about her race, and her training and her wedding and everything else in between. And I told her all about my training and the small bits of inbetween I might also have had (I always find it shocking people have time for anything other than running when training for major physical events like a marathon or a triathlon or an Ironman … how do they do it? Bionic, that’s how!).

Somehow we got onto my Sunday run breakfast issues. How I’ve been forced to give up my favourite go-to breakfast of stone cut oats on Sundays, due to all their mighty fibrous oomph, and how I can’t seem to perfect my blood sugars with the instant oatmeal (due to its super high glycemic index) and yet the instant oatmeal seems to be a lot easier for me to digest. Well, well, well, Miss Hilary, she had the answer for me: Quinoa!

She told me that quinoa is like a superfood, that you could seriously live off just it. It’s not as heavy filling and fibrous as oatmeal, but does have a low glycemic index, which will help sustain the blood sugars. I was sold.

Hilary mixes her quinoa with a dollop of almond butter, chopped up dried apricots or craisons, honey and yogurt. The honey, I think, is used as a sweetener, which I wouldn’t be able to do given its high sugar content, and craisons aren’t really the best option for me either as they, too, are super high in sugar. Here’s a concoction I’ve figured out so far, sans sweetener.

What kind of natural sweetener would you suggest for my quinoa concoction?