For all you virginal eyes out there, I recommend you close them now. Because today, and quite possibly all the days forward, I stick my middle finger up in the face of strength training. That’s right, that obscene gesture is pointed right at you weights, and at you you stinky, steroid-loving gym, and you too you stupid, rusty circuit! Oh yeah, there’s a rant a brewing.

I know that strength training is supposed to be good for me, at least that’s what everyone’s been telling me. It’s supposed to improve my strength and my endurance and my speed. And so even before I started on this whole marathon  kick, I was trying to get a regular strength-training regime in place. I didn’t want to do much, because I really didn’t think the whole she-man-muscle-woman look would suit me all that well, and because I was told I didn’t have to do much. Just a few machines to target different muscle groups. Sounds easy enough, right? Wrong.

I tried out the “fitness facility” in my condo, which is basically the beat-up, little brother of real gyms. Every piece of equipment in there, which isn’t much, is a hand-me-down. The two treadmills are like 10 years old, the stationary bike is like 20 years old – and the TV is still a square TV!!!  And so, I really didn’t have much confidence in the all-in-one weight machine, also in the room, especially seeing as how it was missing straps and pulleys and weights. Awesome.

Off to the real gym I went.

But the thing about gyms, the second you walk into one, it’s like you’ve been instantly transported onto a whole new planet. You’ve got the guys who mistook steroids for spinach, with their beefier than Popeye arms ear-piercingly crashing free weights down to the ground every two seconds. You’ve got the fake-and-bake, how-the-hell-did-they-get-those-bodies girls who leisurely walk on the treadmills, wearing their short shorts, so short they’re practically underwear, and just a sports bra – nothing else. And then you’ve got the weights, rows and rows of ab machines, leg machines, triceps machines, biceps machines, glutes machines, and more. And walking up and down those rows of machines, feeling like you’ve got every eye on you, searching for the ones you want to use, your head is spinning before you can even make it to the end of the row. So, of the four times I tried going, and of the four times I paid a pass to go, I always inevitably ended up on the treadmill, or the elliptical, or some other boring cardio machine!

A co-worker of mine, who used to live in New West, suggested I go to the Canada Games Pool. He told me that they’ve got a circuit, which pretty much lays out everything you need to do, and in a matter of say 20-30 minutes you’re done. Well that sounded brilliant, I thought. But oh how wrong I was, once again.

I went there after work yesterday, paid my $6 fee, and went to warm up on a stationary bike. Well bloody hell, I was only on that bike for 15 minutes, but I had bathtubs of sweat dripping off of me – it was like I was working out in a fricken sauna, I swear I must have lost a pound per minute the amount I was sweating. And as I’m sure you can imagine, with that much stagnant heat filling a room full of exercisers, the smell was putrid!

And the circuit, well that was just freaking ridiculous. The machines were so old and so rusted, I couldn’t even adjust the majority of them to fit my body. One guy took pity on me when I was reefing on the seat of one of the machines, but I couldn’t ask him for help every time I went to a new machine. So after about 15 minutes of frustration, and eight spots on the circuit, I threw my hands up in disgust, and went back to the cardio.

But on a much more successful note: I’m totally rocking the Legs Love Lunges challenge!

Yesterday at lunch (my set time for doing lunges) I added a tree distance to my lunge set, and while you wouldn’t think that would make a huge difference, I was pretty much falling over with leg fatigue on my way back. Probably had something to do with the fact that I had doubled the amount of lunges I’d been doing for the past couple of weeks. But hey, what doesn’t kill me makes my butt firmer, right 😀

One day I'll be lunging up and down this football field, oh yes I will!

AND EARLIER: 50 lunges and butt kicks and knee high thingys.

I opted not to do hills tonight as I had a resurgence of the pain in my butt and I figured it was better to be safe than sorry. And lucky for me, two of the other girls weren’t so keen on doing hills either. So instead, we did a couple of loops around Mill Lake. 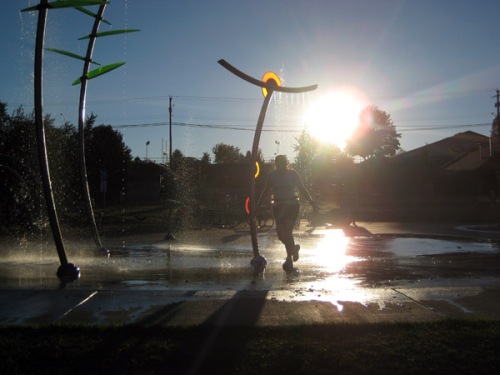 A cooling off ritual through the waterpark.

What strength-training machines do you target at the gym?