All morning I’ve had one song blasting through my head: I can’t live if living is without you – meaning: my blow dryer, my mousse, my comb, my brush, my morning moisturizer, toner and serum, my blush, maybe a little eye shadow and my pajamas too. But alack and alas, I’ve been forced to.

For the first time in the three years of my travels to Europe, my bags were lost. Mario has gone through this ordeal three times in his four travels! Last year when we arrived in Florence (after a long, unorganized delay in Frankfurt) and discovered his bags didn’t make the trip, both of us were thankful it wasn’t my bags. See, I’m kind of a bit of a stresser (definitely would NOT make a good contestant for the Amazing Race) and even though I was pretty sure my bags wouldn’t make it this time given how quick our turnover for the flight transfer was from Amsterdam to Paris, I was still inwardly freaking out. I mean, seriously, I’m in Paris, how on earth can I possibly go a day without my stylish clothes (yes, I packed a spare shirt and socks and underwear, but not the fancy stuff) my nice jeans, nice sweater, nice new jacket?
The horror! The horror!

Another lesson learned: Probably not so wise to travel to Europe just days after running your first marathon.

I was a little worried about my legs seizing up, so I wore my compression tights AND my compression socks, and I tried to get up as much as possible to walk around, however, the KLM flight we were on was so bloody old, there wasn’t really anywhere to go. Unlike Lufthansa where I could loop all around the plane and walk down the stairs to the washrooms (and pocket handfuls of Ritter Sport chocolates too!) on KLM I was basically just walking up and down the aisle getting lots of funny looks the entire way and a few questionable glances from the flight attendants followed up by a “Are you lost?” No, I thought, I’m just looking for the bloody Belgian ice cream you advertised when we booked this damn flight! But I’m not bitter, oh no 😉

My legs didn’t seize up, thankfully, but what did were my toes. Remember those black toes I showed you following the marathon, well, they are now super swollen, irritated red and black toes. My seat on the plane was located directly over one of the engines, and I kid you not, it was so bloody hot the entire flight to Amsterdam. The chocolate in my purse melted, I had to strip down to my undershirt, and my feet were on fire – the floor underneath me was so hot, I almost even yelped a couple of times through the night it was burning my feet so bad. But next door to me, Mario’s seat, was no where near as hot as mine. He was quite the gentleman and offered to switch seats, but then I would have had to deal with a stranger invading my space on the other side of me, so I suffered in, uhm, silence.

When I put my shoes back on at the end of the flight, my feet were so swollen, they barely fit into the shoes. And transferring planes and trains and walking to our apartment just off the Rue Mouffetard  (which is such a great market street in the Latin Quarter, if you ever come to Paris, go there!) I was so pained, I was almost in tears a few times. Mario says I’m hobbled, I say I’m crippled! 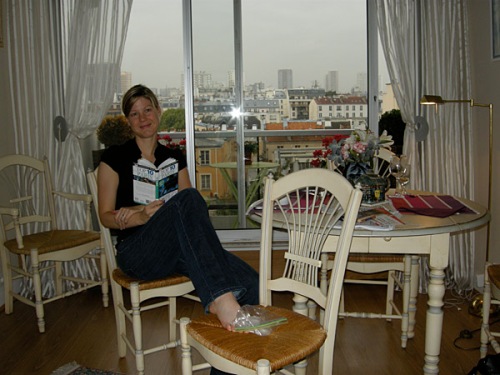 Off to tour Sainte-Chapelle, and walk around Hôtel Deville and the Bastille and the Marais District with, you know, stops for tartelettes and chocolat chaud along the way 😀

One response to “I say crippled, Mario says hobbled”