Eat your heart out Mary Hart!

In one day, I met a clothing designer, went to the premier for a Belgian television series (Melting Pot Café), saw my superstar cousin, who stars in the series, be interviewed by the Belgian version of Entertainment Tonight, and just three days later, went to the World Soundtrack Awards, which is basically the Oscars for movie soundtracks, and which had the likes of Eliot Goldenthal  in attendance – Julie Taymor’s husband!!! (For those of you don’t know, Julie Taymor directed Across the Universe, one of my all-time favourite movies!) And her husband has composed the scores for movies like Across the Universe, Titus and The Tempest. Beat that Entertainment Tonight! 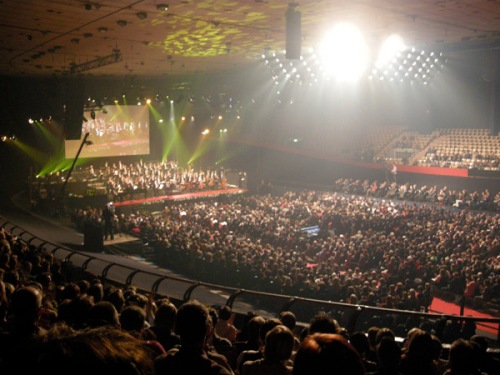 For more on the World Soundtrack Awards, read Mario's blog later this week about it at http://www.thebigring.wordpress.com

Back to the beginning though: the fashion designer. So pretty much from the moment I arrived in Ghent, I had been drooling over my cousin Griet’s wardrobe; she is seriously the epitomy of European fashion for me. Cute skirts, combined with super cute cardigans and coloured tights to match the skirt of the day, along with riding boots and just like the cherry on top of a sundae, her outfits were always completed with the cutest cherry-inspired earrings I ever did see! And the best accessory of all: she wore her skirts while riding her bike to the bakery and the grocery mart and to little Lolita’s school. I LOVE THAT! And so, after tugging on Mario’s arm for days telling him how much I loved her outfits, especially her skirts, I finally couldn’t contain my love anymore and told Griet “I love your skirts!” And low and behold, it just so happened that her sister-in-law Laurence Vlerick, who lived just 10 minutes away, was the designer of several of her skirts. Well, I just had to go.

In Laurence’s home-based studio, where she creates her Mis En Plis brand, I thumbed through skirt after skirt after skirt and fell in love with so many of them. According to the Mis En Plis website (and Google Translate) Laurence decided that after five years working behind a sewing machine in a small workshop it was time to to take her talents a step further. She predominantly designs skirts with eye-popping colours and details that had this princess wanting them all. I think I grabbed a hold of at least six to try on. But after just two, I had fallen in love – with both of them! 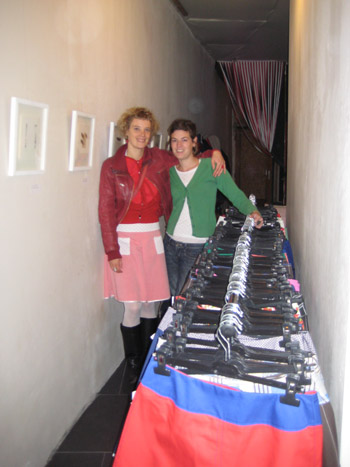 Later that night, Mario, Filip, Griet and I headed to Brussels for the premier of the third season of Griet’s television series, which she had been starring in for the past two seasons. Neither Mario or I had ever been to a television premier before, or any premier for that matter, so we were pretty excited and kept asking Griet if they were going to roll out the red carpet for us, which amused her (I hope ;)) Every time I saw Griet on screen, I got super excited, butterflies excited, I’d never had a cousin of mine on television before! And even though I didn’t understand the dialect of the show (it was in French and is aired in the French part of Belgium) I did understand bits and pieces, especially when one of the characters shouted out “Merde!” and when I didn’t understand, I just followed Mario’s lead and laughed when he laughed.

Filip and Griet at the Melting Pot Café Premier.

And just how I always imagined Hank Moody and Karen, and Sheldon and Leonard, and Meredith Grey and Dr. McDreamy would, following the viewing of two episodes, we celebrated with lots of free wine and Bush Beer (the sponsors of the show … lots of product placement) and appetizers which included Belgian Frites (Interesting fact: French Fries actually didn’t come from France – they came from Belgium. And the Belgians are still a little bitter about the powerhouse French stealing and commercializing their product as their own.)

And me, glamming it up as best I can 😀

And yes, we did get a little star struck when Mario thought he spotted an actress from Mic Macs, a small French film we watched last year, and again when we met the director of an indie Moroccan movie, Five Stars, that he wants to see. But even so, we still managed to maintain a decent form of coolness, and didn’t go all giggling, googly-eyed, schoolgirl fanatic – something the so-called “reporters” from Entertainment Tonight can’t exactly say now can they!