I’ve read about it, watched movies about it, even written about it, but I could never wrap my head around it. And still, even now, after walking freely through the heart of the city where it all happened, I don’t get it.  It being the Berlin Wall.

I don’t understand how one place could be so divided, how a government could oppress its people so much, how they could imprison them behind a barren concrete wall, how the police, who called themselves “The Peoples’ Police” could go and kill their people for something as simple as getting too close to The Wall. Maybe it’s because I grew up in a country and an era that never had to fight for its freedom, but I have just never been able to understand the madness that was the Berlin Wall.

And I don’t think I’m alone.

After an amazing week discovering Ghent, we said goodbye to my family 😦 and hopped on a plane for Berlin; another city, another country, and the place where Mario’s dad grew up for us to discover. And on our first day here, we dove straight into a history lesson by way of the Third Reich, Adolf Hitler, the second world war, the Stasi and Checkpoint Charlie.

We visited the Kaiser-Wilhelm-Gedächtnis-Kirsh, a once extravagant church that was almost completely destroyed by the bombs of the second world war. The ruins of the church’s tower, however, somehow survived and still stand today as a reminder of the horrors of war. 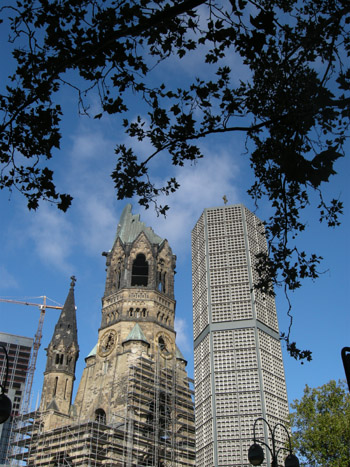 We toured through the Checkpoint Charlie Museum, a mishmash maze of history, that first opened in 1962, shortly after The Wall went up. It was there that I saw pictures of people jumping out from windows of buildings, driving their vehicles through the barbed wire fence with a hail of bullets following them, digging tunnels – all with the intention of escaping to the free country, West Berlin. I saw how a Volkswagen Bug was altered into a people-smuggling machine. I saw a picture of a young boy being thrown by his father from the third floor of a building, hoping to gain freedom, but sadly met his demise when he landed on a hidden steel mattress covered in spikes that was designed by the Stasi to keep its people – at all costs – in the East. I read about a man who had smuggled his girlfriend in a double suitcase and about a husband who had been separated from his wife when the wall went up and who was so desperate for her freedom that he found a girlfriend in the West, who looked like his wife, and stole her papers to smuggle his wife to the West. I don’t know that kind of desperation.

We visited the only remaining piece of the Berlin Wall that still stands today. What was once a division between two countries, is now a monument to how far the city has come. Both sides were covered with graffiti, the concrete crumbling in some spots, and the wires between the cement poking through. With words like Why? and Madness spray painted all over it, I know I’m not the only one filled with confusion – its own people were just as confused.

We also walked through an exhibit in the square where The Wall stands on the history of Nazi Germany and Stasi Berlin (I wish I could remember the name of it, but for the life of me I can’t). And just like with the Berlin Wall, I had read tons on Nazi Germany and watched even more movies on it and heard peoples’ stories from that time, but never have I been able to understand it, understand how the evils of one man could destroy the lives of so many, and how it came to be that hundreds of thousands of Germans were taken in by that man. I read about a six-year-old girl, who was sent to a hospital because she had epilepsy. The Nazis diagnosed her with idiocy and killed her – just like thousands of others who were also mentally ill, or homosexuals, or gypsies, or Jewish, anyone who wasn’t Arian white. It led me to wonder, If I had grown up in Germany in that time, being a diabetic, would I have survived or I would I, too, have been deemed “alien” by the Führer?

The whole time I was walking through these exhibits, with my eyes bulging and my mouth agape, I saw others doing the same thing, shaking their heads in astonishment, shock, disgust. But the thing is, we all kept walking, kept reading, kept asking questions. We wanted to learn more, we wanted to know more – quite the contrast from how I was in school when I had no interest whatsoever in social studies … reading about John A. MacDonald year after year quickly became a snooze for me. But in Europe, a continent that’s ripe with history every way you turn, how can you not be interested? Sorry Mr. Yaskow, your lectures have nothing on this kind of education.

One response to “Land of confusion”