Grin and bear it

Goals. I’ve been thinking about those a lot lately. I’ve been trying to figure out what exactly I want from this next marathon and what I want from my running in general this year. And well, it turns out, I want a lot.

My first marathon was all about finishing, I had no expectations (at least that’s what I told myself) and that was great. But this one, I want more. There will no longer be that element of surprise as there was with the first one. I’m going to know what to expect from the first kilometre to the 42nd kilometre. Yes, yes I know that every race is different, but at least now I’ll know what the bottom dregs of that last 10 km could feel like, and hopefully I’ll now know how to avoid it and/or get through it. 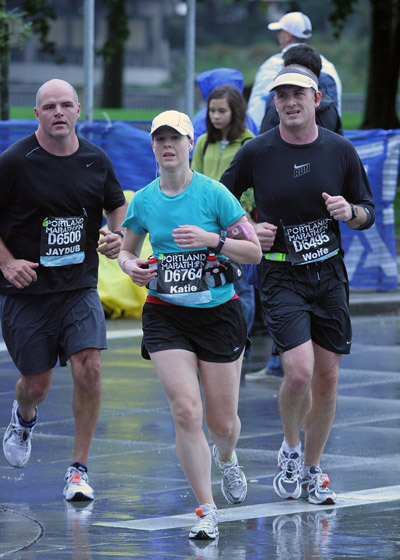 Hear me now, you see that face there, that face will be a smiling face in the next race!

So, what am I going to do differently this time around to ensure that happens? Cross train. I had every intention the last time to incorporate strength training and cycling and hiking and the works into my training, but once I started running, it seemed I just wanted to keep on running, nothing else. (I’m a bit of an addict like that.) But not this time. I’m already doing the pilates twice a week, and I’m also trying to figure out a schedule where I can hit the gym a couple of times a week to go on that god-awful dreaded stationary bike and do something or other with weights. I’m also looking into getting a skipping rope as I heard it can seriously help with speed and sounds way more fun than speed intervals! (Don’t worry, I’ll be doing those too. Boo :()

I don’t just want to run a marathon though, I want to do other races in the lead up to help get my head into the game. I want to do a 5 km race, a 10 km race and a half marathon. I’ve already got the 5k Resolution Run on New Years Day in the bag, but what oh what should I do for the 10k and the half marathon? Do I stay local (anywhere from Abbotsford to Vancouver) or do I stray a little out of the comfort zone? I like the idea of going somewhere for at least one of the races, but it can’t be too far, somewhere I could go for the weekend and be back at work for Monday morning? And yes, I am taking suggestions.

Do you have a favourite race you like to run?

And hopefully, with all that under my belt, come five months from now I’ll be able to complete this next marathon around four hours. Maybe I’m being overly optimistic here, given that I was nowhere near four hours for my first marathon, but hey, my pilates chick did tell me I needed to be more affirmative in my goals. So there you go. I said it.

And in case you missed it last night, us diabetics got a huge leg up by Nat and Kat winning the Amazing Race. Nat has type 1 diabetes and the two of them played one of the best, most logical, sensible, calm games I have ever seen on the show before. And it was just further proof that we can do anything we set our minds and bodies to. There’s a great segment in this interview with the two of them all about how Nat worked with her diabetes to get through this race. Yay diabetes!!!

One response to “Grin and bear it”