Who says you can’t go shopping in the middle of a run? Not me, oh nooo 😉

So I had planned on running on Friday to make up for missing Wednesday’s run, and had even changed into my running gear and was just about to leave the house when my blood sugars got in the way. After struggling for nearly 2 weeks with high blood sugars, they finally came down – a lot. With a 3.1 BG, I ate a few sugar tablets and a granola bar for insurance, and waited … and waited … and waited. But those darn blood sugars, they were stubborn, and before I knew it, the daylight hours were fast fading. The run was a no go.

So, that left Saturday. But because Saturdays are usually my rest days, it was somewhat difficult to get my butt out the door. I needed an incentive. Hmm, I thought, the Lululemon factory outlet store is about the halfway mark for a 10 km run = incentive. Now, generally I’m not a Lululemon fan; I don’t like their prices and I don’t like how they don’t much cater to girls with curves like mine. But last week one of my favourite running chicks who lives in “Lulu” was wearing these super cute pants that weren’t super tight and I thought those would work for me. And so, Saturday morning, with snow pelting me in the eyes, I ran to Lululemon.

You’d think I’d be a star walking into that store with a runner’s glow right, I mean it is a store of athletic wear after all, but no, I got some serious stares. It was as though my sweat was contagious! But, I walked away happy, new pants wrapped in my fuel belt, $20 cheaper than I would have paid in the real store. Mission accomplished.

The run wasn’t my only exercise. A few weeks back I was connected with Olympic rower Chris Jarvis, who also has Type 1 and who runs the non-profit organization I Challenge Diabetes, which hosts a variety of events/activities for us diabetics. He invited me to an upcoming rock climbing event at Cliffhanger Gym in Coquitlam. I got to be honest, I was so incredibly freaked out by the notion. While I was a great climber as a kid, and loved monkeying up the trees with my big brothers, I almost always had issues with the down. On several occasions my dad had to put the hero hat on. And, uhm, hello James Franco, need I say more? But I was also really intrigued with being around other like-minded diabetics, so I kicked my scaredy cat to the curb and embraced my inner kid. 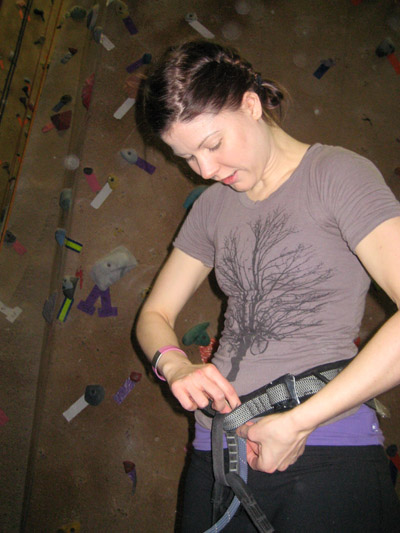 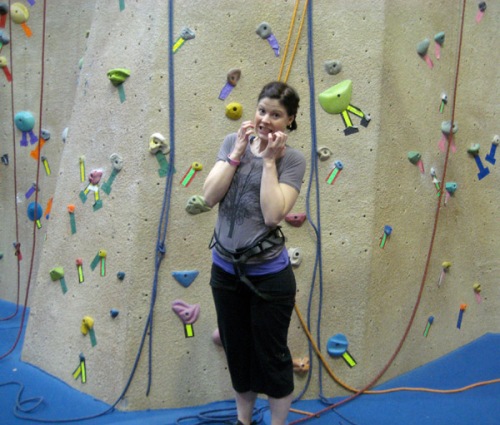 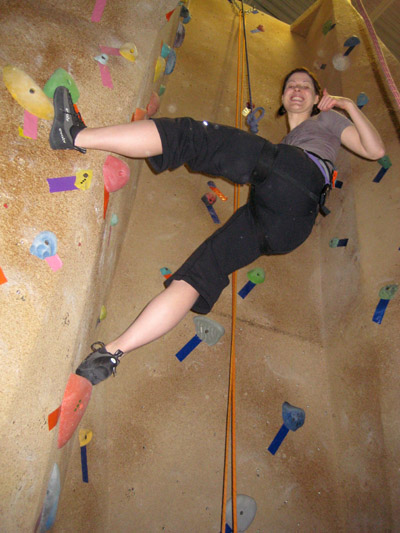 Oh my gosh, I cannot believe how much fun I had. I was climbing, and pulling myself up higher and higher, and using my limbs for leverage, and shimmying up against the wall, and getting stuck and then unstuck. And sure I was shaking to beat all hell to begin with and was somewhat untrustworthy of the dude holding my rope in place, and only twice did I let go of the ropes with both hands to rest for a bit, and only after much coercing from everyone down on the ground. But my gawd, it was great fun. I woke up this morning with bruises all over my knees and shins, and even a lump, and achy arms. It’s like war wounds! And when I climbed to the top of the “chimney” (oh yeah, I got the lingo) a narrow wall that was crazy hard in some spots, the sense of accomplishment I had touching the chain was like … butterflies 😀

I wasn’t as crazy as Chris though. There was no way I was attempting this: 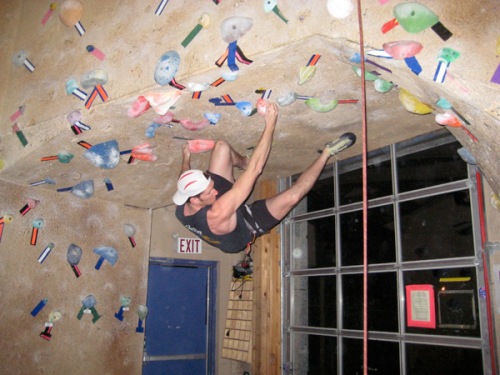 There was actually only three of us there for the adult portion of the event, myself, Chris and his buddy Steven who also has Type 1. After the two hours, we sat for a bit and talked about the disease and how we each work it with our sports, and the different things we do to make it all work, etc., etc. And it was really cool, because it’s not every day I can share notes with like-minded diabetics, in fact, it’s very rare.

Have you ever gone rock climbing?