Dear Devonshire, why oh why do you tempt me so.

Yesterday’s work day was all about the tea. Tea in the morning, tea in the mid-morning, tea for lunch, tea in the afternoon, and then of course tea with high tea. And well, really, how could I possibly resist the three tiers of crustless sandwiches, the finger-licking good wildberry streussels and brownies and butter tarts, and oh man tea scones with strawberries and Devonshire cream. Ohhhhh to die for really. Literally.

This could very well be the devil in disguise

Do you see those three tiers? 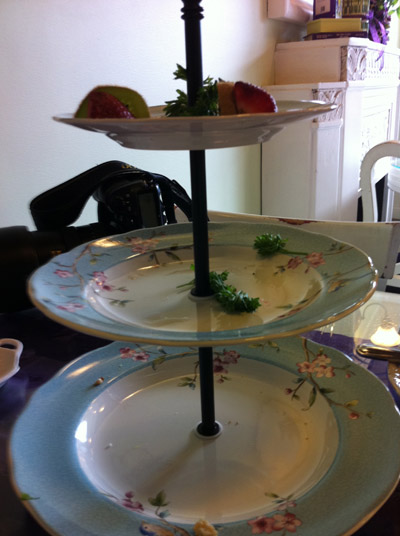 Did I happen to mention yesterday was a run day? Yeah, that kind of sucked … especially given that I decided at the last minute to join my girls for their hill training:

Because the Devonshire had caused my belly to instantly expand to the size of about a 7 month preggers chick and feel like there were a 20 pound sack of potatoes in there, I was a little slow in getting myself motivated for last night’s run. Normally I try to get on the road as quick as I can after work so I can get home quick, but I was pretty sure had I gone straight after work, it would have been a super lethargic run, possibly infused with Devonshire and tea vomit. And so by the time I was finally ready, it was already six o’clock and I figured I might as well just wait until 6:30 when I knew my favourite running chicks would be on the road and at least if I hurled I’d have some company doing it.

They were running hills. Five hills, repeat hills, not short hills, not overly steep hills, long, winding, ugly, nasty, you can’t see the top hills. I hate these hills. We started going, and because I’m a bit of a powerhouse on hills, I got ahead of my girls pretty quick off the hop, and I didn’t really feel like I was giving her all that much, my legs felt fine, but the fact I couldn’t see the top of the bloody hill majorly messed with my head. Four of those hills, I stopped premature, not because my legs were fatigued, not because I couldn’t do it, but because the kink in that bloody road told me I couldn’t do it. And by the fourth hill, acidic bile was also starting to creep up my esophagus, oh dear. On the fifth hill, I started to go and I just felt like I didn’t have it, so I pulled off to the side and told my girls I would walk it, which made me feel totally feeble, I mean, I am supposed to be a rockstar on hills after all! They got a good distance ahead of me, before my competitive juices took over,  and I was sprinting like I’d never sprinted before, my legs kicking, my arms pumping, my breath hard and fierce. I passed one, I passed two, I passed a complete stranger, and with victory in my heart, I again prematurely cut the hill short. Awesome.

That girl running behind them was a freaking machine!

4 responses to “Devil in disguise”