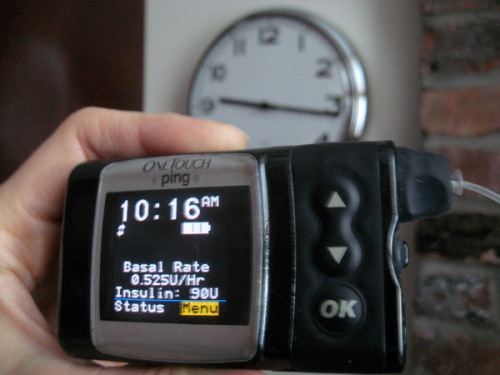 Pic-a-post #3: If computers and cell phones can change the clocks over automatically, surely the insulin pump industry can to. Behind the times Animas, just saying…

While the world over was celebrating get an extra hour weekend this weekend, I was mourning the loss of a dear friend. This friend wasn’t a friend I saw often, in fact she rarely came around, but those times she did were so special, filled with smiles and laughter and warmth, such an incredible warmth. But today, her warmth was iced over.

Goodbye waffles, my friend, I will miss you dearly.

When Mario woke me up this morning, he asked if I’d be interested in waffles for breakfast. It’s not a question he asks often as he knows I love, love, LOVE the waffles – plain waffles, buttery waffles, fruit laden waffles, syrupy waffles – and that I really don’t have the resistance to say no. He also knows that, despite this bordering on crazy love, I struggle so stupidly in trying to figure out how to calculate the proper insulin dosages for her.

That’s only half of the scribbles I’ve written on that page trying to figure out the perfect equation. I’ve used the book’s suggestion, which failed. I’ve eyeballed the size of the waffle and guessed, which failed. I’ve even measured the bloody thing, but again to no avail. Today, two hours after waffles, my blood sugars were a sickening 17.1!

This is the waffle trend. And sadly, today, the realization hit me like a slap in the face. I could no longer be a lover of the waffles. I would have to say goodbye to my beloved friend. A sad, sad day.

On another note: Not even three posts into my month-long initiative for pic-a-post diabetes style, and I totally screwed up. Friday’s post should have had a diabetes-related photo, but did not. Good thing this post, with TWO diabetes related photos, makes up for it 😉