I am so not a morning person. I’m the kind of person who stays in bed until the very last second, and if my eyes open, even just a half a minute before the alarm blares, I get annoyed. Don’t get me wrong, I’m also not the kind of person who can sleep ’til noon, in fact, most days I’m out of bed by 8 or 9 at the latest (I think that’s out of habit; almost 23 years of having to wake up to check your blood sugars, take insulin and eat breakfast will do that to you) but I do value my beauty sleep nonetheless. And yet, get this, I was out of the house this morning by 6:15 a.m. – that’s right A.M.!!! – with my sneakers on to boot! 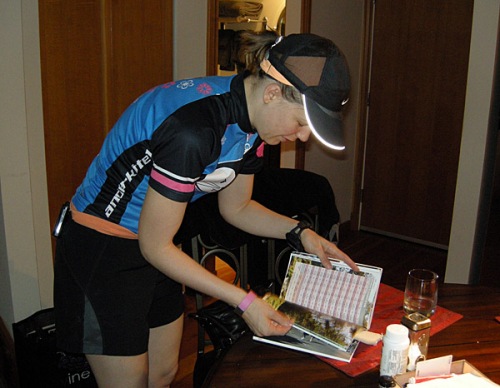 Mario was so shocked, he grabbed his camera to snap a picture for proof ... I'm not exactly the most cooperative posing-for-pictures type at 6 a.m. 😛

Because I had a school board meeting to cover tonight, I thought the early morning run was my best option. Normally I would have just checked out of work a little bit early for my 6k tempo run, but that was before a bear was spotted yesterday afternoon chilling out in a tree right near where I like to run. Even though the poor bear met her demise, there was still no way you were getting me out onto that trail! So, a morning run it was.

It was a kind of eerie starting out a run that early. Even though the Quay’s boardwalk wasn’t deserted (there were people roaming about with their dogs, and older folk slowly sauntering along) it was still a lot quieter than it usually is. And the dim not quite day light, combined with the slight morning breeze and the light fog hovering over the river, and the fact that New West really isn’t the most upstanding place in the world when the light hasn’t yet entered full bright mode (it has a reputation) definitely equals some eerieness. Good thing I forgot my iPod – I needed every ounce of alertness I could muster at that early hour.

Despite that though, there were several things I noticed this morning that I don’t tend to notice on my mid-day, early-evening runs, like for instance the changing of the foliage along the Quay, and how early the city workers water the hanging baskets, and the wreath of flowers that’s attached to one of the memorial benches, and the Ferry Boat that was unusually docked in our neck of the woods.

Apparently, I later learned, that when the ferry boats are passed their prime, they're sent out to the Queensborough shipyard to get cleaned and stripped of any bad stuff and then sunk and used as diving docks.

I almost got caught at the train tracks, but luckily for me (especially seeing as how I had to go to the washroom) it was still a ways back and I was able to make it across.

While some residents on the Quay don't like the trains, I actually think they're kind of cool – it makes our loft feel more authentic in the sense that we're living in an industrial area right next to a rail yard!

This morning’s run was a nice break from all the people-watching runs I tend to do on the boardwalk, and an opportunity for me to just really take in my surroundings and enjoy the beauty and coolness of the area that I live in – despite its reputation!

Lesson learned: I’m a heck of a lot more chatty in the morning after a run than I usually am!

One response to “Early morning rising”