Well, as much as I hate to admit it, there’s a dirty hippie in me yet. I became one with nature tonight – and I actually enjoyed it!

For the past few months, I’ve been doing yoga on Saturday mornings, in my condo, with a yogi girlfriend of mine, which was working out great until I started marathon training. I didn’t like the idea of doing yoga on the same day as a run, given that I’d have to do the run almost immediately after my yoga, so we decided to move our sessions to Mondays. But because my condo is a loft and is completely open, there’s really no place for Mario to go if we were to set up on the living room floor. So, we decided to take it outside.

I was skeptical at first, especially looking out the window and seeing the seemingly never-ending sight of grey that us B.C.’ers have been tortured with all spring and summer. And I wasn’t so sure about having people around watching us go through the moves, but Mario suggested we go to Hume Park in New West, which is a central location for the both of us, and is a lot quieter than other nearby parks. And it was great.

There was a group of about five teens in the picnic area off to the side of where we were set up and that was it – no one else was around. It was just Alison and me … and the bugs! Oh man, were there ever bugs! But like I said, I became one with nature. There was only really one moment where I let out a loud shriek and frantically slapped away at the thing that plopped down onto my arm and looked like it could have been a bee, but I’m guessing that maybe it wasn’t because it didn’t sting me. Other than that, I was alright … although, mosquito netting might have made it better 😉 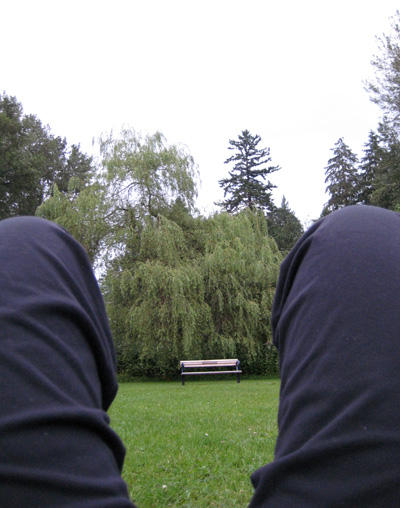 The view from my yoga mat

I know that I was supposed to be focusing on the moves, but with the beauty of everything around me, it was really hard to concentrate on my inner zen. Every time we went down into the downward facing dog (which was a lot) I was mesmerized by the horseshoe of trees around us, and the lone bench in the middle of the field, and the clovers and mini daisy looking things popping out of the dewy ground. And every time we went down into the plank, the open field and the joggers and dog walkers far off on the trails kept stealing my gaze. And when we were doing the upside down pigeon (not really sure if that’s the right terminology) I had the perfect view of the patches of blue in the sky trying to break through. And every time we settled in the (proper) pigeon, I couldn’t help but take the opportunity to catch up – it just felt so natural. 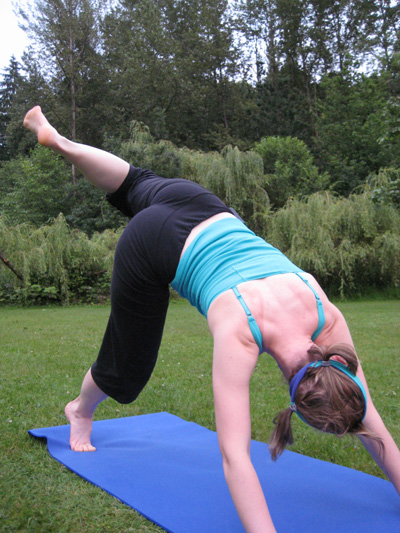 Wow! I've still got back muscles even though I haven't dragonboated in like three years! 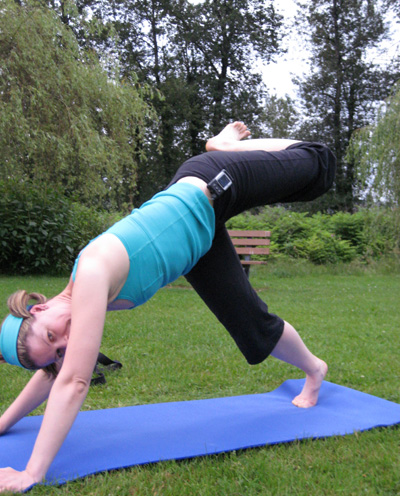 And the front view of my one-legged downward facing dog.

It was a great setting, with a great gal (who just got her first teaching gig in a studio – yay you!), with a great view. And yeah, I totally loved it! Mind you, I wasn’t so keen on wondering if those so-called sparrows circling up above (at dusk!) were actually bats! Nope, didn’t like that at all! 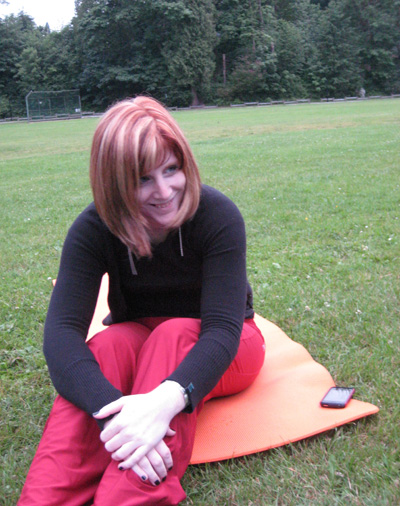 My yogi chick was not so keen on getting her photo taken, but serves her right for sticking the idea of bats in my head!

Reality check of the day: I’m officially into my fourth week of marathon training, just three more months to go ’til race day!!!