Turning it around one prick at a time

Ah yes, the weather gods did not look down on me favourably today. The white flakes of terror started falling all around me shortly after noon. Just in case you haven’t yet gleaned, I’m not such a huge fan of the snow, never have been really. Maybe it has something to do with the fact that I live in B.C. and as beautiful as this province most definitely is, snow falling anywhere away from the mountains is not a beautiful sight. It’s not the fluffy cotton-like snow you’d get in say St. Moritz, but rather it’s a murky brown, slushy, ice-infested, gross, gross, gross snow. And driving in it, well, take it from me, a princess who spends 80 per cent of her days in a car, it’s hell! But I guess on the upside, least I’m not training for a marathon in this. 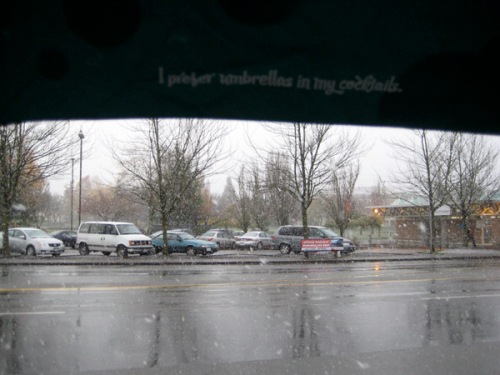 Snow, snow, go away, don't come back another day!

So you know that stationary bike last night, not only was it super boring, and not only did it make me all pukey feeling, it also managed to bruise my back. I kid you not, my spine in the lower back area is so super tender that driving to work, sitting in my car with my back to my seat, painful.

Another part of me that’s all tender, my fingers … but that’s probably a good thing (finally she stops ranting!) I’ve been testing my blood sugars like crazy this week trying to figure out a pattern or a trend or anything to tell me what the heck is going on with them. I’ve been testing one hour, two hours, three hours, four hours after meals, I’ve been eliminating snacks and testing, I’ve been testing at 1 a.m. and 3 a.m. I’ve been writing the blood sugars down, writing the carbohydrate intake down, writing the calculations for how I (and by I, I mean the super smart wizard in my pump) have determined how much insulin to take. I even increased my basal flow on the weekend from 0.500 units an hour to 0.525 after much trepidation (I always feel a little defeated when I have to increase my insulin dosages, kind of feels like I’m doing something wrong having to take more insulin.) And finally – finally – after a few weeks of struggling, I was so close – sooooo close – to recording a perfect blood sugar day yesterday and today, just one mishap yesterday after the gym, and one today two hours after lunch.  I’m on the mend baby! Hopefully 😀 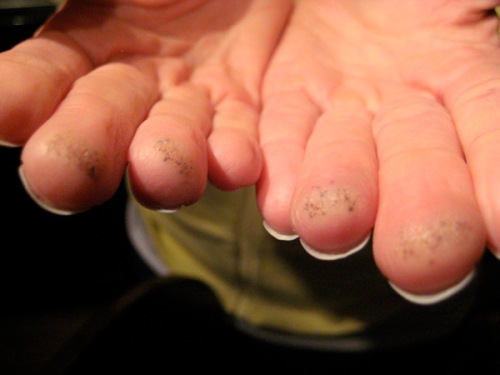 That's 23 years worth of calluses right there!

One response to “Turning it around one prick at a time”