For people with diabetes, going out for dinner can often be a challenge. While “normal” people can order whatever the heck they like without a second thought, us ***diabetics*** we have to go into the outing with a lot more research and preparation under our belts. We have to know what kinds of foods are on the menu, what the serving sizes are, and how many carbs per serving it equals out to in order to figure out how much insulin we should take for the meal. Now, I got to be honest here, while I’m all for diabetes perfection, when it comes to meeting friends for dinner, I am far more detailed in getting myself all dolled up than I am in taking the time to figure out the necessary food measurements and calculations and such. So, that being said, when I go out for dinner, ninety per cent of the time, I pretty much have no clue what the carb ratio is for what I’m eating.

But fear not my friends, in situations such as these I have a trusty little number that I pull out of my back pocket, a number that never changes, a number that I’ve come to rely on. Sixty. When in doubt, I always guess the meal to be 60 grams of carbs. How did I come up with this “fall back” number? Well, the majority of my meals, save a few (ie. pasta) generally fall within the 60 grams of carbs range, and so I just figure, when in doubt, go with what you know. I know 60. It’s not a perfect number, sometimes it works, sometimes it doesn’t. Last night, it worked.

Ashley and I met at the Cork and Fin in Gastown for our regular three-month catch-up session. The two of us go way back, our friendship began more than 17 years ago in the hallways of high school where were still awkward, young, impressionable teenagers. We laughed together, dated together, rebelled together, spent many an hour telling each other our secrets in the wee hours of the night (much to the chagrin of her younger sister who was trying to sleep in the room above). And as we grew older, we refused to grow apart. She is the kind of friend that you can go months without seeing, but the moment you’re sitting down drinking wine together it’s as though no time has past, she is the kind of friend that is one of the greatest kinds of friends.

The Cork and Fin is a really cute, hole in the wall kind of restaurant that offered a prix fixe menu, a seafood tower, and tapas. It was a new restaurant for me, and seeing as how we had months of catching up to do, we went for the varietal tapas style: Grilled albacore tuna steak with pomme puree and tapenade. Smoked sablefish poached in milk with napa cabbage in grainy mustard. Pomme frites with lemon aioli. Butternut squash with a maple glaze. And we got it all wrapped up with fresh bread and a nice bottle of Chilean cabernet (yep, my head was definitely in the happy clouds on the Skytrain ride home :D) 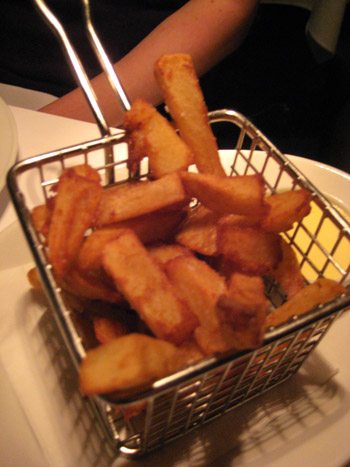 Now, these foods aren’t exactly the kinds of food I eat all the time, and they’re definitely not foods that I know the carb counts for off the top of my head, so that good ol’ number 60 once again became my magic number. Before the meal, my blood sugars were lower than I like them to be at 4.0, but three hours after the meal, after an insulin dosage based on that 60 grams of carbs number, they were 5.6. Perfection.

How do you deal with eating out and figuring out the carb ratio?

***Re: “diabetics” I know this is a forbidden label amongst the diabetes community, but as I’ve stated before diabetes does not define me, we know that, and I’m sorry but it’s just a heck of a lot more efficient to type ‘diabetic’ than ‘people with diabetes’ What can I say, I’m a writer first ;))***